I belong to the Victoria Quilters' Guild and they have an annual quilting retreat held at Pearson College in mid-June.

Here's a photo of the view from the dining room: 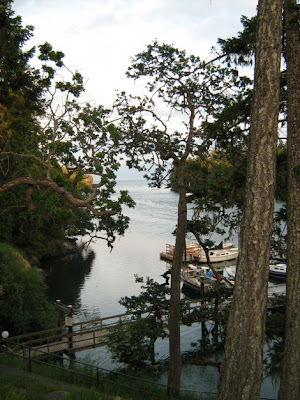 Here's the class I was GOING to take (with Coreen Zerr): 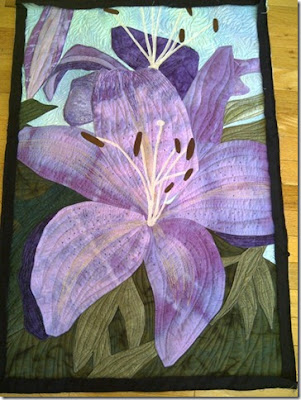 but sadly I was lacking in the inspiration needed to choose the fabrics for this quilt.  I love scrappy quilts and it appeared to me that the fabrics needed to be hand-dyed or similar and I just wasn't 'feelin' it'.  So, I defaulted back to my comfort zone ~ mystery quilts.

The first day I enrolled in a quick quilt class called "Daystripper". 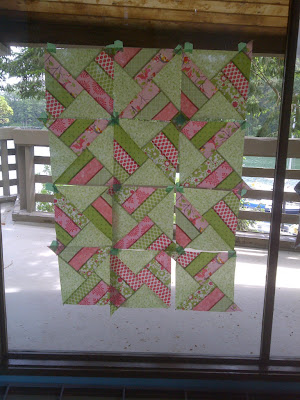 You may not be able to tell but I made an error in cutting some of the triangles so improvised with a straight green triangle and it turned out well.  The joke in our class was that I invented a new pattern.  That's my story and I'm stickin' to it!

I had brought along some fabric to cut out the squares for a Disappearing Nine Patch for a baby due in August.  I had enough fabric to do two Daystrippers, why not??  Here's the second one.  This is for a very special first baby arriving in August for Karen and Stacey: 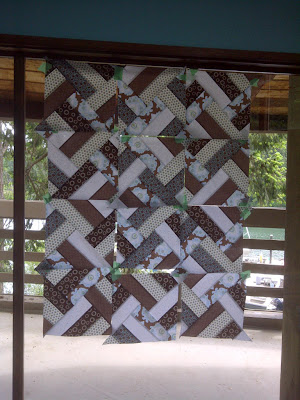 Here are some others:

Day Two and Three was the Kaleidostrata mystery quilt.  Let me start off by saying that I love the sample that Arlene did.  This is a modern quilt pattern.  Lots of them looked great, but not mine.  I chose traditional fabrics and for this quilt pattern it just didn't look right, in my opinion.  And since I'm the quilter creating this quilt my opinion counts.

Here were my fabrics.  I loved my focus fabric in the yellow and blue with hints of green: 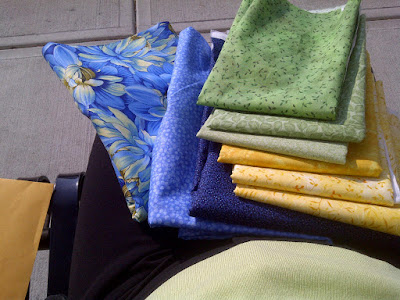 Here's a photo of Shirley's at the beginning.  I love her colours! 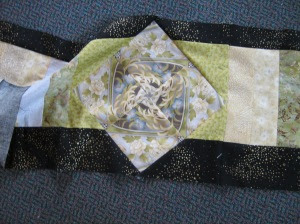 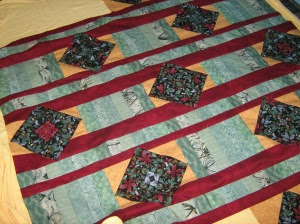 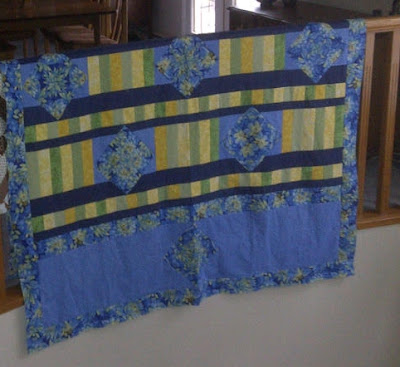 It's just not singing for me.  So I tried turning one of the blocks to do what my friend Shirley did to hers: 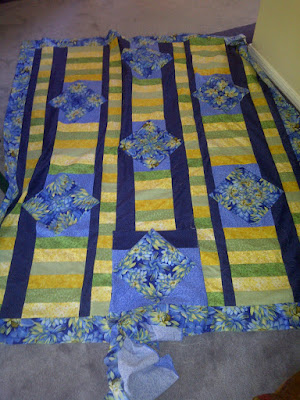 Still not feelin' it.  Next step ~ deconstruction!!  I'll keep the strata units to use for something else.  I have a plan!  I love the technique we learned for the kaleidoscopes (4 squares cut stack n whack style and then twirled to make the kaleidoscope).

Anyway, I'll post the blocks on another day.  For now, here is a photo of the mystery quilt that Ursula Reigel created for the 25th anniversary of Quilting in the Trees.  Isn't it gorgeous??  There were blocks revealed in the guild newsletter and the finale was done at Pearson.  I just love this quilt! 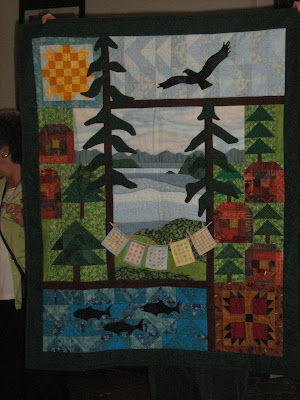 Until next time,
Mavis
Posted by Mavis at 9:55 AM

Email ThisBlogThis!Share to TwitterShare to FacebookShare to Pinterest
Labels: Quilting in the Trees