It's all about the foot!

I had a major ah-ha moment last night.  I'm quilting this at the moment. 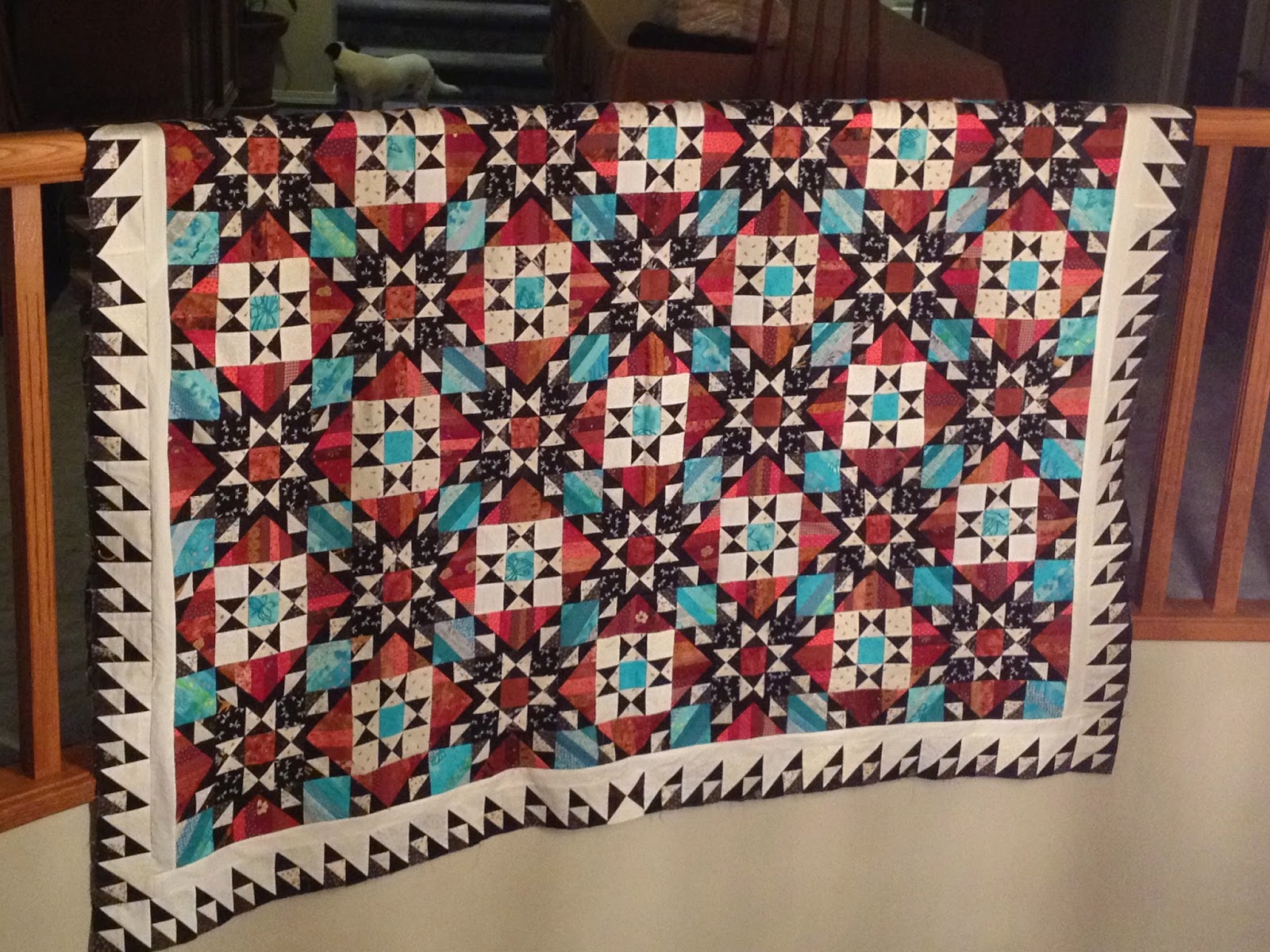 Originally, I wanted to hand quilt it.  I chose some Warm & Natural cotton batting because I thought it was a good choice for hand quilting.  I took the quilt top, batting and backing to a longarm quilter to be basted so that I could manhandle the quilt during the hand quilting process without the basting taking a beating.

I wanted to go with this swirly stencil pattern on the quilt: 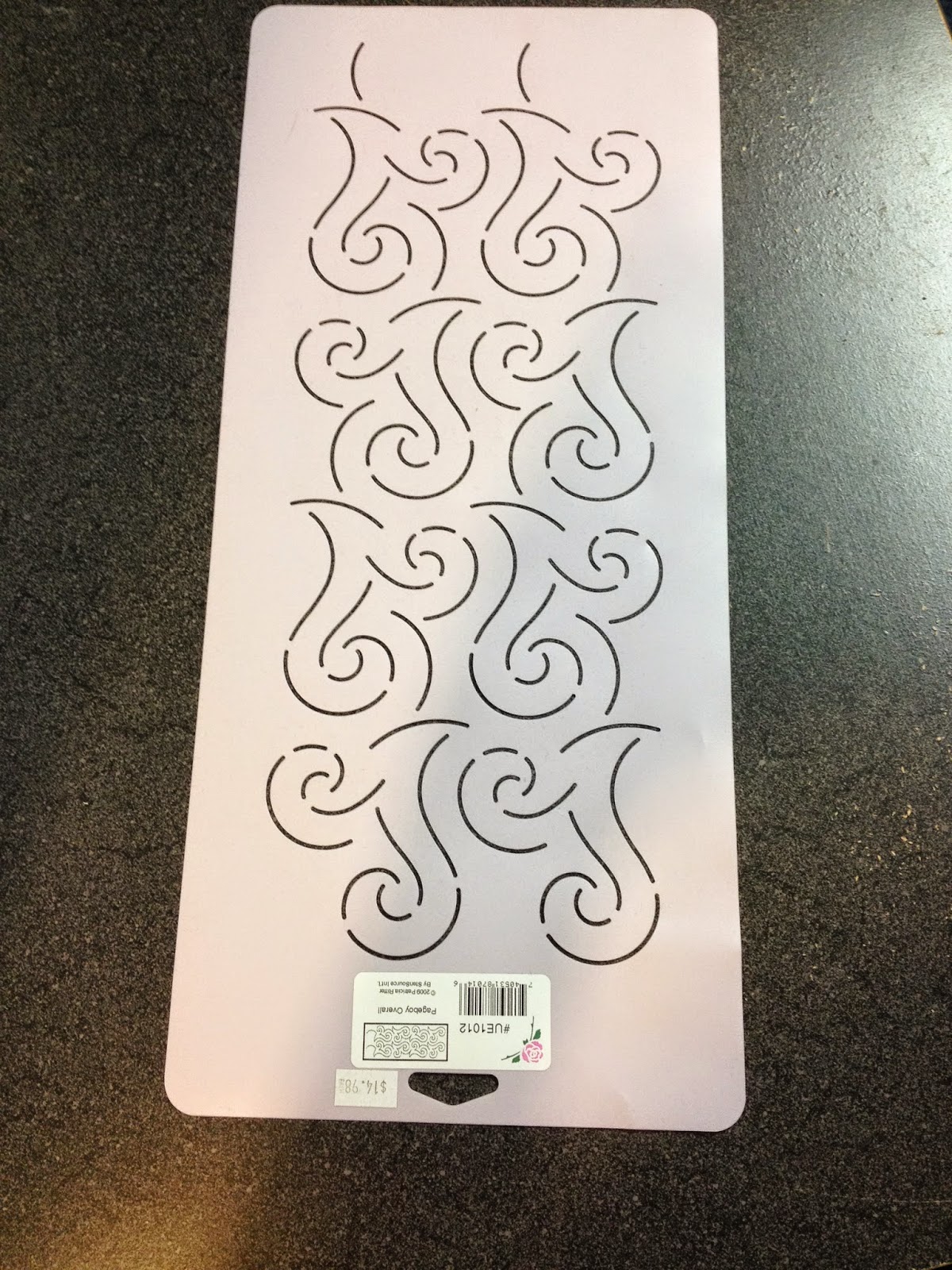 but after some advice from an online hand quilting group I decided that was too ambitious and that a simple outline quilting pattern would be better.  And so I begun.  After one block I realized this was a mistake.  I should have done better research on my batting.  It was not the 'smooth as butter' experience I had heard about from other quilters.  It was like pulling a needle through concrete.  No way.  Not doing it.  Too much pain and frustration and that's not the goal!  I decided that I would machine quilt this one and enjoy the hand quilting process on another simple pattern with less intersections and humps and bumps.
I started stitching in the ditch but the walking foot wasn't happy.  And I wasn't happy.  I didn't want a frustrating experience.  When all was said and done I decided that a simple meander is what I was going to do.  The pattern is so busy that I didn't want anything to detract from the colours and the block interplay.

So I removed the walking foot, dropped the feed dogs on the machine and added this closed toe darning foot:

See the bottom hole is totally enclosed and metal?  Well this is what I use for standard free motion quilting (FMQ) so I assumed this would be the ticket!  Nope.  It was another exercise in frustration.  It kept stopping at the intersections and my quilting was inconsistent because I felt like I was forcing the foot over the humps.  Argh!  What's a girl to do!!??  I thought a couple of times when frustrated that I should have just had it long arm quilted and called it done.  Quilted by cheque!

And then I had a thought...what if I switched to my other FMQ foot that came as a basic tool with my machine (Janome 6500). 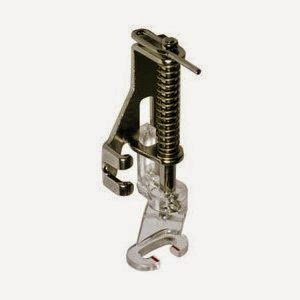 The difference was immediately noticeable!!  The plastic foot hopped right over the seams so much better than the metal small circle closed toed foot.  I can't believe it took me that long to figure it out.  Maybe it's obvious to everyone else but the penny sure dropped for me at that moment.

Here's my quilt under the foot: 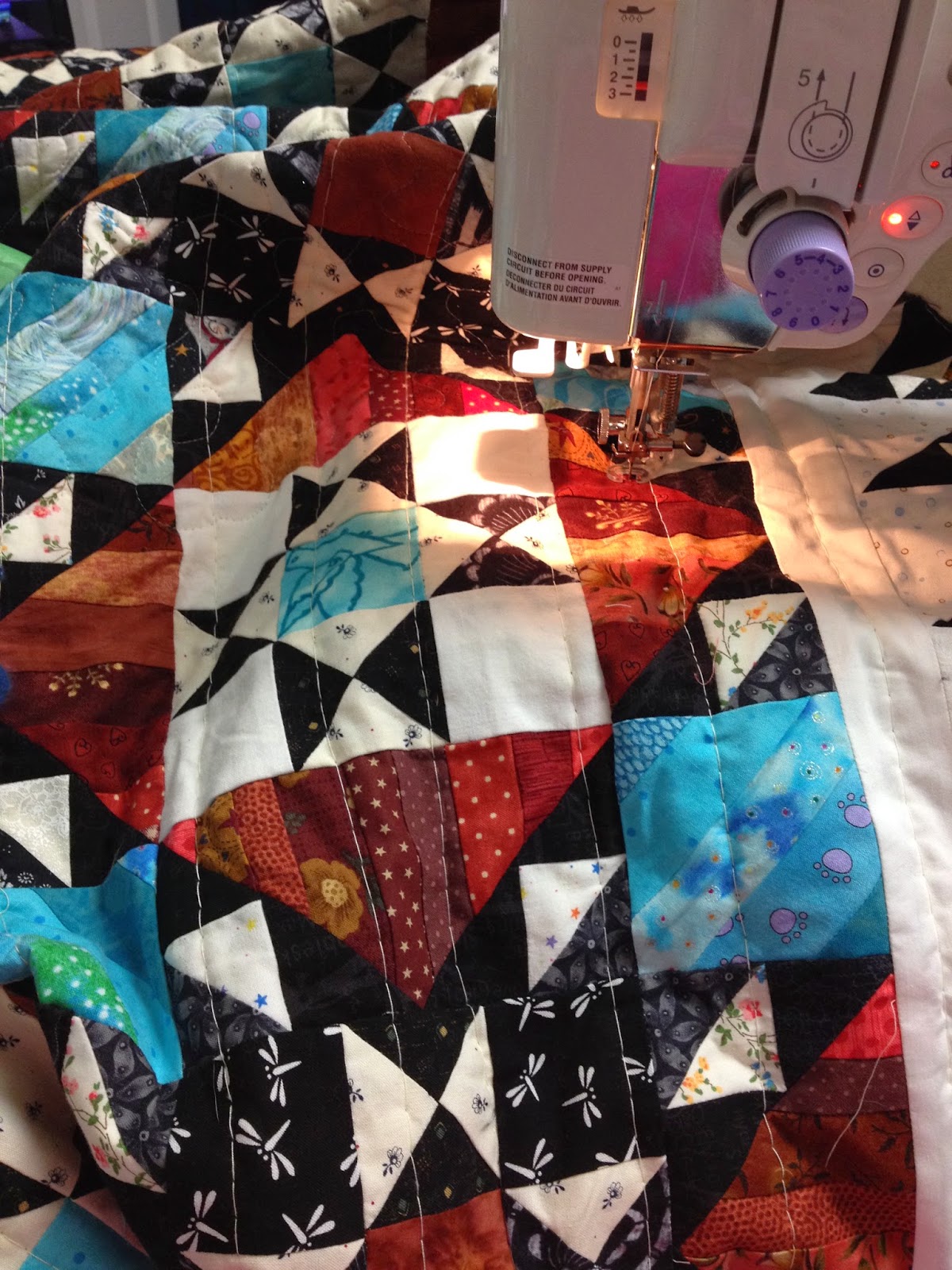 You can see the long arm basting stitches more than you can see my free motion stitches but here is a picture of the quilt using the closed toed metal foot and I can see the difference in the flow of the meander stitches.  These look jerky to me, not rolling and smooth like mine normally do. 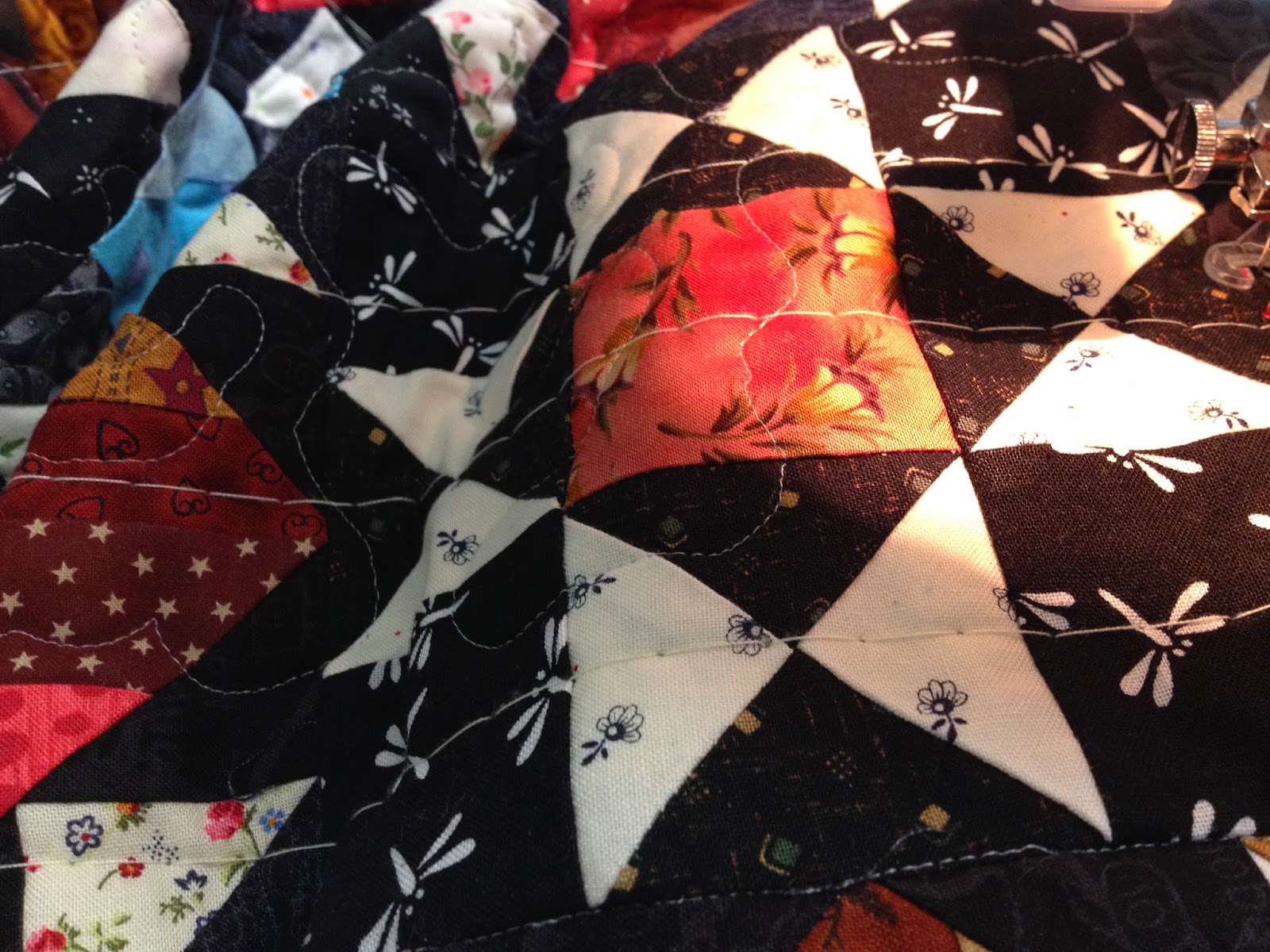 You can see how the thread I chose doesn't stand out very much and that's what I wanted.  I chose Superior Bottom Line in a light grey.  I've learned this year that grey thread is a good choice for a disappearing act on the front of the quilt.

I'm almost done quilting this top.  I was working on the borders last night which were a different quilting pattern.  I'll upload more pictures when the quilt is finished.  I'm going to have to go and cut some binding because soon enough this baby will be on my lap for the final touches...hand binding, which I truly do enjoy.

As for my hand quilting, I need to do more research on the best batting to use.  I've heard that poly is the best which is encouraging news because it's also cheaper than Warm & Natural.

I've learned some valuable lessons on this project.  Assess your tools!  Assess your batting.  Don't make assumptions.  Do your research.

I'm about to go online and find what I can on this foot because this whole exercise in choosing feet has made me think about the untapped potential of my tools. 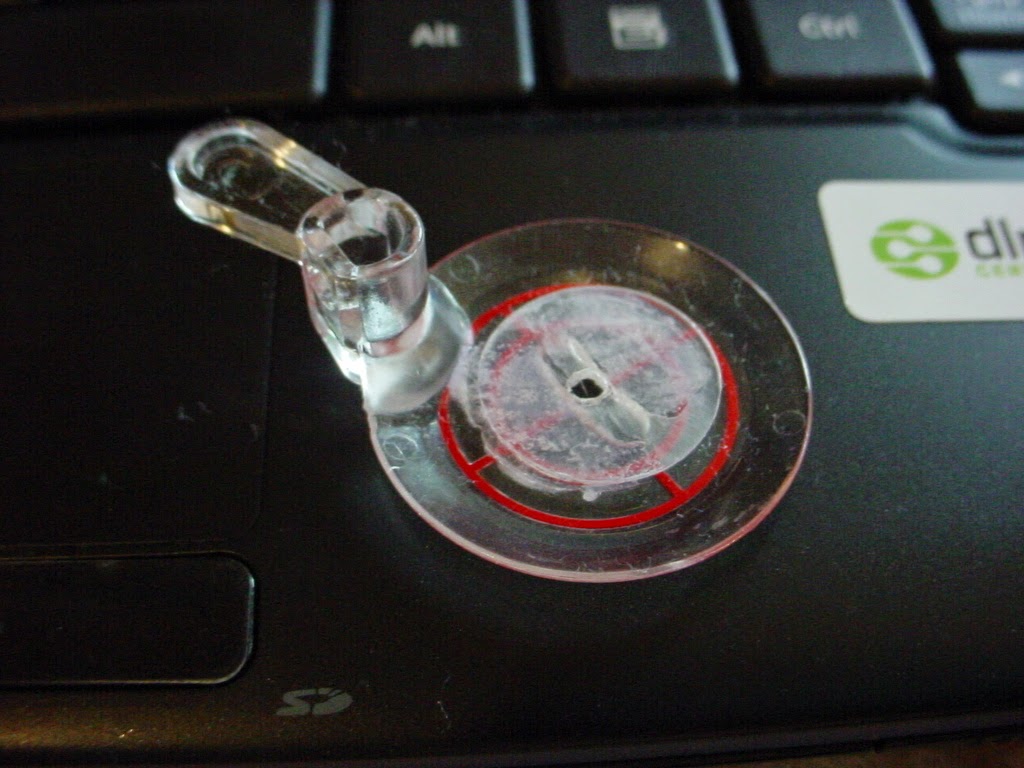 I've got one of those in the package of feet and have never used it.  Maybe I'll learn something new today too!

Happy Sunday everyone!  Until next time,