So here's a question....what do you do with orphan blocks?  You know...those blocks that just don't fit into a project but are perfectly useful and even pretty.  Do you make potholders? Do you give them to another quilter? Do you just keep them in a bin with no purpose?

I am the latter mostly.

About 10 years ago, my hubby and I still owned our B&B on acreage with a huge house, beautiful gardens and an empty horse barn.  We had a vision of actually making it a cabin, studio, or similar which could be added to the B&B room inventory (only more rustic) or a place where musicians, writers, ministers could come for a quiet time away from the rat race to create, rest or contemplate. 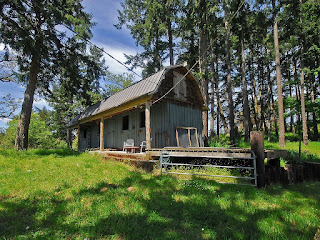 The vision didn't come to pass.  It would have taken a capital investment to create a new septic field, the construction/reno, etc.  However!  As the vision was underway, I had already envisioned the rustic furniture that would be in this cabin, and of course, as a quilter I could already see a 'cabin-ish' quilt on the bed.
About that same time I joined an online block swap for 12" quilt blocks.  The idea was to pick your block from the Quilters' Cache website and cut fabric for your chosen block for the number of people in the group.  I chose a red and white fabric to represent the one Canadian in the group.  My American counterparts sent me fabric in red, white and blue.  I was going to add those blocks and create a sampler quilt. All these blocks lived in a project bag labelled "Dayspring sampler" after our B&B name. But ....
Long story short, the red, white and blue blocks ended up going into a Quilt of Valor for an American friend who is a veteran, and just had a heart transplant.  The red, white and blue seemed more fitting for him as patriotic colours than the more random idea I had.  I finished it and sent it off late last year. 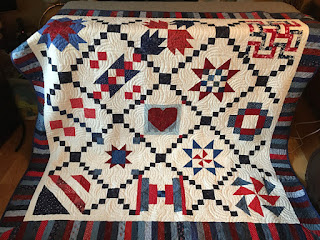 The remaining red and white one that I didn't use in this quilt became part of the actual original sampler quilt idea.
I found a grid online that I thought would work and began filling in the spots with my orphan blocks. A lot of them weren't useable so I still have a pile left to use.  You have to use either even numbered finished blocks or odd numbered finished blocks.  Duh...I know.  It didn't occur to me when I first started this project.  Those odd numbered ones will be used in another quilt. 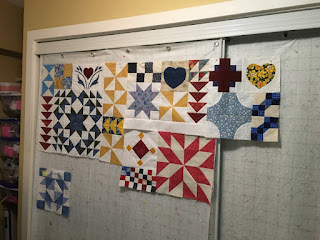 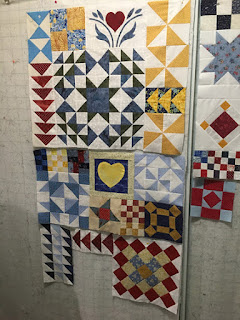 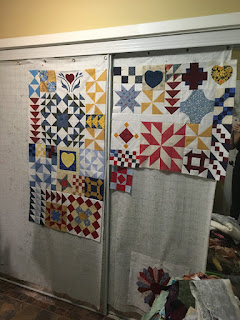 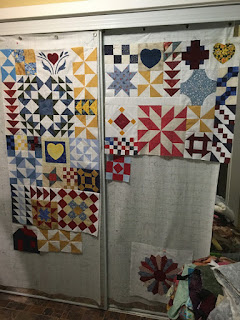 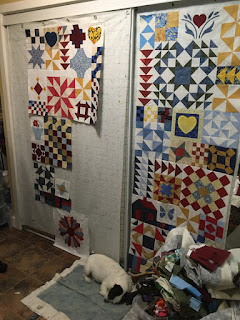 This little dog (and her brother) were with me underfoot for most of the journey.  Too cute to make her move.
I was determined to get this quilt top finished and quilted so I could enjoy it.  I'm working very hard at finishing my UFOs one at a time and not multiples at a time.  This is working for me and I'm getting closer to the end.  My reward will be starting a new project.  The top was finished last week and I have been waiting for batting to get it quilted.  That got done late yesterday so it's officially DONE except for the binding. 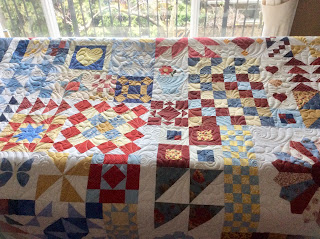 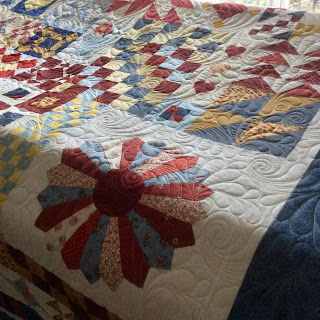 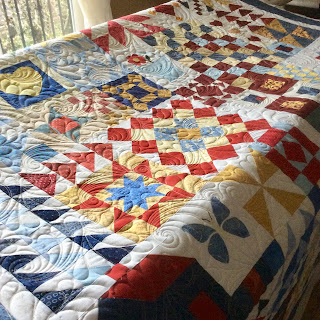 I quilted it with a pantograph called "Alp".  I wanted the thread to appear sort of golden like my yellow fabrics in the quilt so I chose "Glide Biscotti" which I was very happy with.
The quilt is no longer going to live on a bed in our B&B cabin as we moved and downsized in 2015 and have many fewer beds and no guests.  I don't know yet where this quilt will end up but I'm so glad that I persevered and got it done. 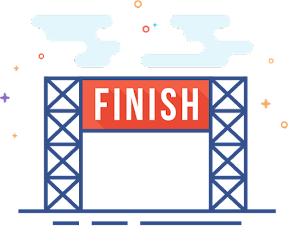 In my next blog post, you'll see the next project on the finishing list... my "Charming Denim Quilt".  This UFO isn't as old as others but after I finished my sampler I pulled it out and have been having a lot of fun getting it done too.  I'm waiting for some fabric I purchased from someone else's stash to do the borders and then it too will be quilted and declared done!
You have to know that there is JOY in finishing.  There's definitely FUN in starting something new, but it is surpassed by the JOY in finishing.
~Mavis

Posted by Mavis Reynolds at 2:01 PM