This one is an original design and will be a pattern for sale as soon as I finish writing it up: 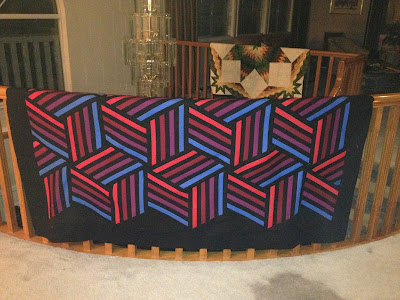 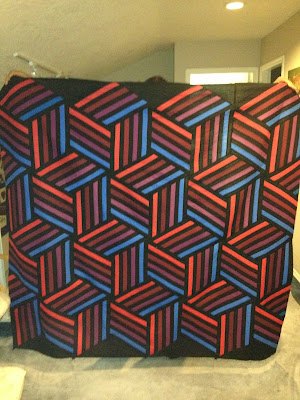 My husband suggested I create an optical illusion quilt and printed out an image of the tumbling block in gray tones.  I started playing in EQ7 and this was the result.  I originally thought it would be a small wall hanging but it's not quite queen sized but would definitely fit a double bed.  My husband suggested it would be a great quilt for his camper van.  Great idea !!  It was his idea for the quilt so it will be a perfect man quilt for the man van when he goes camping with his buddy.  Tomorrow I will be on the hunt for a dark charcoal backing.  That's what he wants; and that's what he'll get.

2013 is my 'skill building' year so in this one I had plenty of practice doing Y seams. I can't say I've 'mastered' them but I'm a lot better than I was before I started.  Anyway, I will now write up the pattern and list it on my etsy site.  I'll put a link in my blog once it's done.