We had two days at sea and finally arrived at Kotor, Montenegro, our first port.  This morning we were up early for our first excursion off the ship. We chose not to purchase one of the excursions but to walk around and explore on our own.  Kotor is located where the Balkan Mountains meet the Adriatic Sea.  The city sits on a deep majestic bay surrounded by steep cliffs. There is almost a 360 degree view of the city as it spreads around the base of the mountains and up the hills. 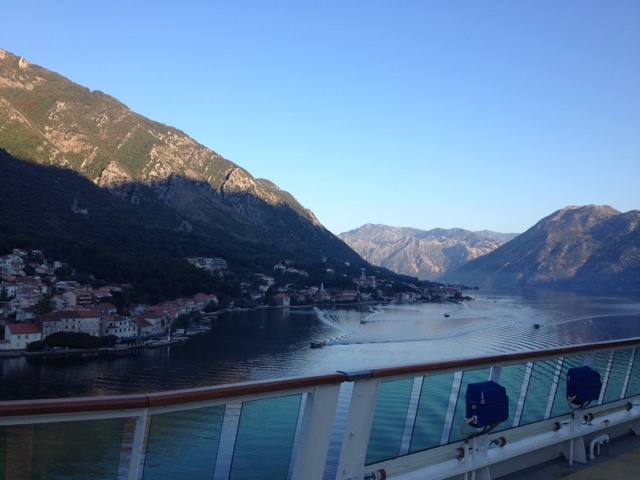 We had to be transported by small boat in groups of 40 (tethered is the correct term) to the Kotor dock where we were met by a multitude of small tour operators ready to relieve us of our Euros to show us the sites. We had already decided to explore on our own so we just started walking. The heat was extreme and we were thankful that we got an early start before the midday sun appeared. We meandered through the old city and captured some great photos of the cobblestone streets, doorways and shuttered windows.  This window box added a bright bit of colour to the street. 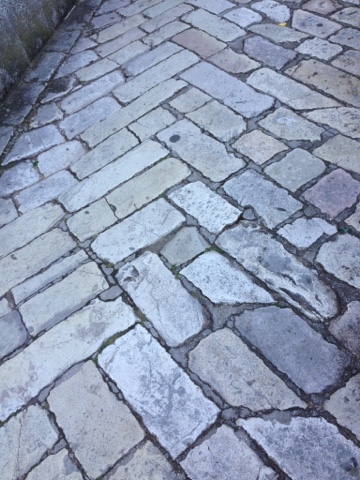 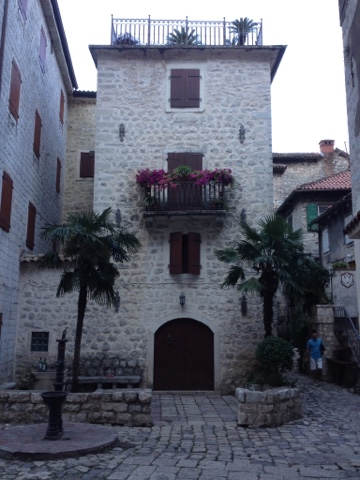 When we found a coffee shop with free wifi I took the opportunity to reconnect with family and to check my email. An Americano is 1.60€ here which wasn't bad at all. I've heard that in Italy a good coffee can cost 5€.  I was happy to get the free wifi and sit for a bit.

We then decided to try the hop on hop off bus. They have generally been good in my experience and not badly priced. This one cost 20€ and was about an hour round trip. We ambled along the shore until our ship was out of sight, meandering our way past ancient buildings and hotels, apartments, churches and houses and more modern buildings.  At the far end of the city there was a 15 minute stop at the Roman tiles site and this was worth the stop. 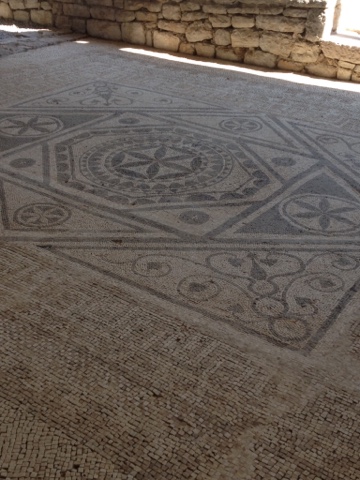 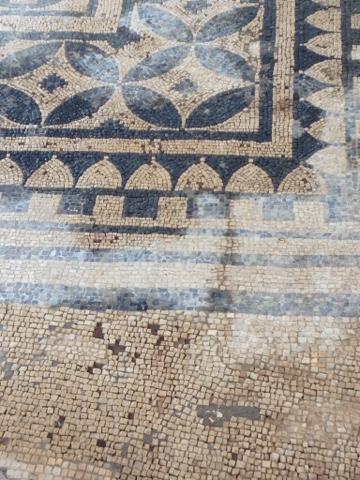 These small tiles are about 1/2" each and the designs are not unlike quilt designs. I took plenty of photos and plan on designing some quilts based on the colours and shapes I've seen in Kotor and in general from this trip.

Kotor had a severe earthquake in 1979 and this city is now a world Unesco site. It looks to be a very poor region and from what we heard on the audio tour, fishing and tourism are their main industries. 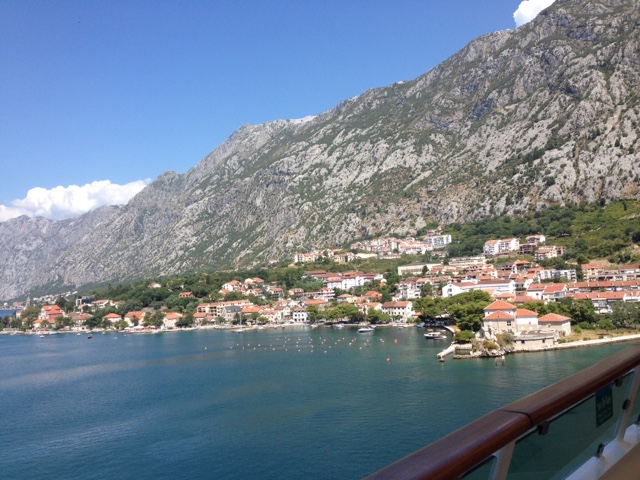 They have beautiful scenery in this seaside city and I was glad that Kotor was one of our ports of call on this trip.

When we return to the ship our next scheduled class with Bonnie Hunter is Razzle Dazzle cutting techniques. This was supposed to be our project for the at sea days but due to lack of a machine supplier Bonnie had to come up with an entirely new project for us. We still get the cutting instruction and got to see her Razzle Dazzle finished quilt.

It was a great day on land and back at sea. Tomorrow morning we have video instruction in the morning and then we arrive in Florence at 3:00 and will be in that port overnight. A group of us will be exploring together and we will stop for dinner in Venice before making our way back to the ship. The captain said tonight that a storm is on the horizon and should start sometime after 10 pm. As I write this post it is nearly 2:00 a.m. and I don't sense any rough waters from the centre of the third deck.  Those on the outside decks may have a different report in the morning.

Until then it is time for this girl to try and get some more winks. Sleep has been a big struggle. Jet lag is real my friends.

Email ThisBlogThis!Share to TwitterShare to FacebookShare to Pinterest
Labels: Mediterranean