I'm working on a LOT of things.  But that makes it kinda fun and alleviates the possibility for boredom right?  At least that's my story.

I swore I wasn't going to start new projects, that I was going to focus in 2012 on completing UFOs.  I have 12 listed and I want to get through all 12 of them this year.  It feels good to finish projects.  But it also feels to start projects and I confess, I am weak.  My resolve dissolved.

So, as you may know from my previous posts I started a new project in Sisters at Quilter's Affair at a Friday class.  Pictures are here for the teacher's quilt and another new start that I confessed to beginning in the hotel room after spying a focus fabric that I simply couldn't resist.  The picture for was uploaded as a test from my blackberry here.

Anyway, here are some pictures of MY fireworks quilt  which I think I will be naming "Fiesta" and a repeat photo of my "Curly Birds of Bend" quilt which is currently on my frame being quilted.

So that's what I've been working on.  Last night I decided to work on the Fiesta quilt again before I lost the construction method.  You know how that goes right?  You 'get it' in class but then you leave it for awhile and before you know it, you're asking yourself:  "how's that go again?"  So, determined to get these both done and not on next year's UFO list.

Something else I've 'started' (but this one doesn't count as a new start and I'll explain why) is a quilt called "Bow-Dacious".  It's out of Bonnie Hunter's "Adventures with Leaders and Enders" book.  I was looking through all 4 of my BH books yesterday and was captured by the beauty of this quilt.  Here's a photo of one that Subee made. 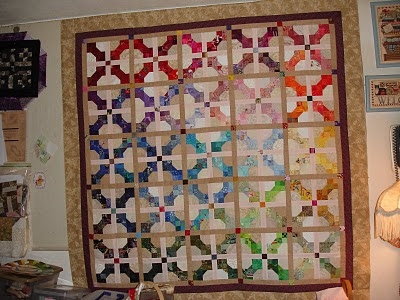 Before I started sewing again on my Fiesta blocks, I dug into my 1 1/2" strip bins and started cutting 1 1/2" squares and sorting them into colour families.  The theory behind "leaders and enders" is rather than wasting thread after pulling a sewn block from the machine, you put a scrap of fabric under the feed dogs, sew down to the end of it and snip off the completed block.  This prevents waste of thread but also as a leader, rather than an ender, you stop the machine from chewing the beginning of your new block.  You can find a better explanation in Bonnie's book, but suffice it to say that I thought this would be a BRILLIANT way to use up my  1 1/2" strip scraps and create blocks for a new quilt in the process.  2 quilts underway at the same time without even trying!  Gotta like that eh??  And THAT's why it doesn't count as a UFO.  :D

I think I've got about 2 4-patches done but I didn't actually get that much sewn last night.  We had a full house at the B&B so I just snuck in a few moments between meeting and greeting guests and showing them to their rooms and giving them the info for breakfast.

Hopefully I will be able to post some pictures soon of those building blocks and a completed top for my Fiesta quilt!  Pretty excited about that one.  It's a departure from my normal quilt style and fabric choices.  Pretty wild but I'm loving it!

I am going to hang out some sheets on the line and mosey on up to my studio and sneak in some more play time.