It was a very early morning.  Alarms were set for 5:30 and it's much easier to 'rise and shine' when you are travelling than on an ordinary day.  We got packed up ok and on the road a bit later than we had hoped.  We had reservations for the 8 a.m. ferry and the deadline is a half hour before.  We rolled through the ticket gate at exactly 7:30!!  Phew!  I drove Liz's car  as she is storing it with a friend in the Okanagan.  The remainder of the family were in the truck.  I was therefore able to get this footage of Harriet rolling through the ticket booth at the ferry.

Harriet at the Ferry

For our first time taking down camp and getting ready to roll, we did okay....but there was some drama the night before which put us behind a bit LOL.

Around dinnertime I realized that I hadn't seen the pouch with my passport and Tony's in it for a few days.  I  have a fairly photographic memory so I remembered exactly where I saw it...a few days earlier, in a basket of books, but now it was gone.  What changed in the last few days?  More sorting, shedding, finding homes for things in the trailer and a trip to Value Village and to the storage locker. And then the panic set in.  What if it accidentally made it into a donation bag?  A frantic call to Value Village at about 8:30 followed by a trip down there where we were escorted into the back warehouse by a kind and helpful employee. Liz and I spent the next 30 minutes dumpster diving (or so it felt) through a sea of donation bins/bags/carts only to come up empty.  The store was now closing and we didn't want to keep the employee any longer, so we went home, said some prayers in the truck and accepted that the pouch and its contents may be gone.

We also remembered a basket that went to storage so Liz and I went out there to check.  Nothing.  Once my hysteria subsided (remember we are leaving town the next morning early) we returned back to camp and went through Liz's room because we had not checked in there.  We have been trying to sort and clear the clutter and in so doing, the basket I remember that had the pouch in it was moved to her room.  Crisis averted as I hear Liz say..."hey mom?...as she approaches our bedroom where I am once again looking in every little spot where it could be...and the little brown pouch is handed over to me. We both gave each other a glance , then burst into laughter followed by a hug...crisis averted!  Would it even be a true roadtrip without the 'almost lost your passport the night before' drama??

Our driver woke up first so she could have a shower and wake up for the journey.  Next was Grandma and Papa and Aidan (who was woken up with as many kisses from Mom as it would take.)  When we got to the ferry Liz double checked the tire pressure and while it was fine she was feeling that there was more weight on the tires than should be so we decided to pull into a weigh scale in Delta for piece of mind before we embarked up the Coquihala highway through the mountains.  I guess all that studying for her ICBC road test paid off because it turned out we were over in weight by about 80 kilos.  We then remembered that we had a full fresh water tank so we dumped it in the parking lot at the weight scale station as suggested by the safety officer. He was very helpful and it gave us a lot of comfort for the trip knowing that we were now under the maximum loaded weight. 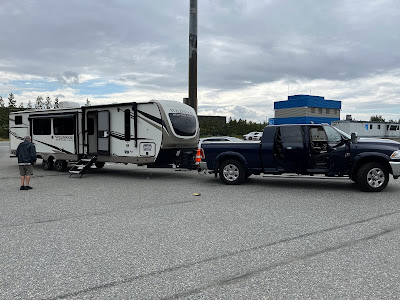 From there we set off.
I was able to have some quiet time by myself which turned out to be a blessing as the landscape and vegetation brought back many childhood memories of travelling with my family as my dad inspected the highways (he was a Paving Operations Superintendent with the Department of Highways).  So while I missed travelling with 'my pack' it was a blessing in its own rite.  There was some great coffee at a rest stop which kept me alert.  That was a challenge as not much sleep was enjoyed the night before.

I managed to take this dashcam video of the 'dry country'.

Beautiful!  I see where our friend Bruce Crawford (artist in Summerland) gets the inspiration for his paintings.

We arrived at our next campsite a about 5 p.m.  It is so much different than Oceanside but that is to be expected.  We are high in the mountains, not at sea level, and the vegetation is entirely different.

We all had a great sleep.  It's very quiet and barely any wind.  Aidan is always the first one awake so it was an early morning and we enjoyed coffee outside.  We did a short walk about to see if there was a playground, or any amenities (laundry).  Sadly no playground or laundry that we could see, but lots of boulders and river rocks (nature's playground).  No problem...it's level and quiet and the neighbours are great.  We even had some help getting backed in last night.

Today is a low key day.  We are expecting friends for a visit and will enjoy some time with them.  Oh...and we were greeted by thunder and rain this morning but it's expected to pass by tonight.
FYI I'm purposely leaving our exact location vague until we have moved on.  We want to keep our little safe. Thanks for understanding.
Mavis

Posted by Mavis Reynolds at 2:10 PM