You've got to be kidding me!

After leaving South Jetty Thousand Trails (Florence, Oregon) we plugged in the coordinates of our next campground (Trinity Lake KOA).  I was excited about this stay because my dear friend Karen lives about 30 minutes away in Weaverville and I haven't seen her for probably 20+ years.  It was time!  So if we could make it happen we were going to.  Karen and I met in 1984 in Israel at Project Kibbutz, a year long discipleship training program.  We have stayed friends with our fellow team members and have had reunions through the years but it's been way too long since I've seen Karen.

We were using an app called RV Life which chooses safe routes for RVs.  What you want to avoid when you are towing a travel trailer is low bridges which could spell catastrophe.  In the true spirit of backseat driving (ahem) I also plugged in the destination in my iMaps app.  My map had us taking the I-5 down to Redding and turning west towards Weaverville and then to Trinity Lake.  Well, the "safe app" took us on a different route over Scott Mountain which had more hairpins that the local beauty shop, and no guardrails.  At one point we were over 5,000 feet. Karen  had warned me that the roads were a bit winding but trucks make it so Liz would be fine. So when we encountered them we thought 'no big deal' and proceeded.  There was nowhere to turn around so we were committed. But oh my gosh!  I should have squawked more but didn't want to second guess the driver or the App.

It was the most treacherous road yet.  Not many pictures were taken as my white knuckles were clutching something other than my camera.

When I told my friend Karen the way we drove to Trinity Lake, she gasped in unbelief.  She said they close it down in the winter and she hesitates driving it with her truck anytime.  Well that was the end of using THAT app!  Liz actually wrote to them and told them how dangerous the route was.  We haven't heard back.  We lived to tell the story and Harriet is in one piece.  Our nerves were shattered (especially Liz's).  We stayed at Trinity Lake for four nights.  What a wonderful place.   The amenities were great and we thoroughly enjoyed our stay there.  We extended to four nights which afforded me TWO visits with Karen.

We had a great campsite with lots of room.  We even got to sew outside. And enjoyed a lovely Shabbat breakfast outside. 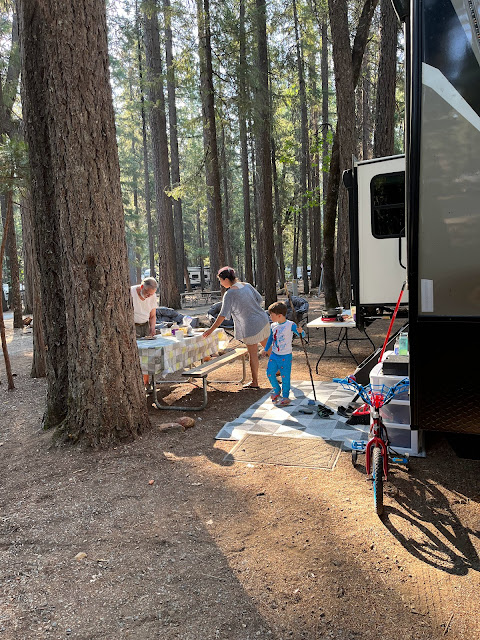 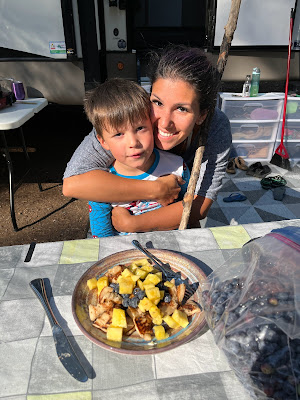 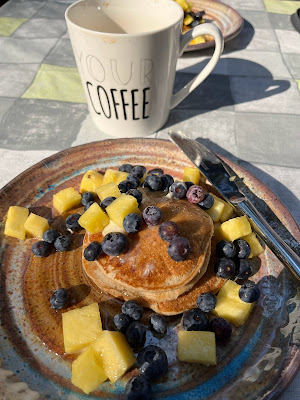 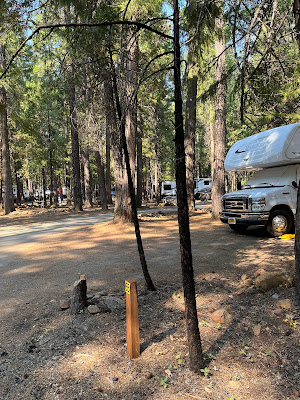 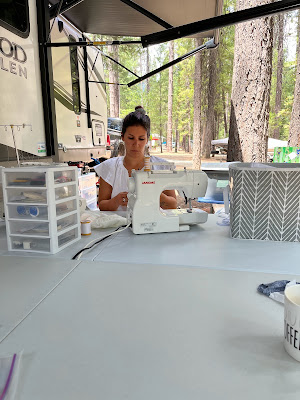 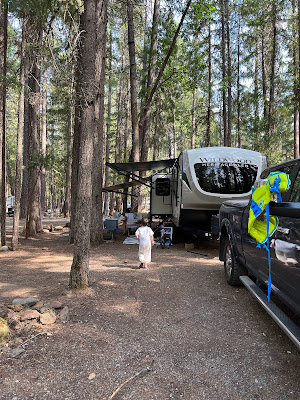 Thanks for following!  See you at the next campsite.

Posted by Mavis Reynolds at 7:31 PM