Ok...so who named these towns?  We thought they were quite comical and I promise you (that's something the "southern" people say) that these are actually on the map.

It was also quite entertaining to hear other customers talking in the gas station once we crossed from Texas to Arkansas.  I felt like I might just be in a John Grisham novel. The accents are very thick, but I guess it's actually us that have the accents now.  Anyway, it was entertaining to the say the least.  We in the south now!

We spent just one night in Arkansas at the Little Rock KOA.  I really want to give a shout out to KOA.  They have been always clean, friendly, and very welcoming.  They escort you right to your site and the majority of them actually come and pick up garbage every morning.  You just need to leave your full garbage bag at the end of your site and they will collect it.

On the one night stays we usually don't end up hooking up the sewer or unhooking the trailer from the truck.  It makes for an easier and earlier getaway in the morning.  We are getting it down to a science now.  Liz and I  prepare the inside cabin before the slides come in.  Liz and Tony and I all take care of the outside.  It takes us about an hour to be ready to hit the road.

We are not going to "Texarkana" nor "Arkadelphia" but are glad we left Fort Worth when we did.  There was a massive rainstorm which would have been treacherous to drive through.  So we are very grateful that we missed it.  We have been blessed with missing the bad weather storms.

I decided to work on my hexies in the car.  It was really too bumpy and I did prick myself with a needle multiple times before I decided that a better activity might be to remove the papers that could be removed (because their borders were totally encased). 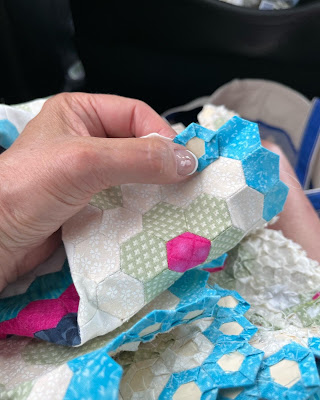 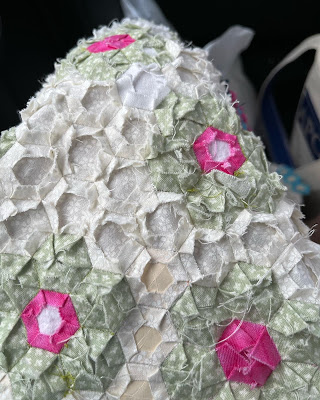 Next up is Tennessee!! And we will be so happy to finally get there.  Our church, Jacob's Tent, is there and we have been longing to visit them for a very long time ever since we found them online.  And we will be celebrating the fall Feast of Tabernacles (Sukkot) with our Jacob's Tent family.

We have a lot to be thankful for!

See you in Tennessee y'all!

Posted by Mavis Reynolds at 3:05 PM