I'm up early this rainy Saturday for one reason~ there's a workshop being held by the Victoria Quilters' Guild.  This is what I'm doing http://www.victoriaquiltersguild.org/Workshops/Spring%20Fling/Photos/Mae%20Petersen2%20Jan%202012.jpg

My colours are beiges and blacks and I'm planning on making mine a table runner so I don't have yet another unfinished bit quilt project to stare at me. :cD

My friend Terry will be here in about 1/2 hour for breakfast first so I am going to sign off for now but will post pictures later!  I'm making apricot and brie stuffed french toast.  Simple and very tasty!!

Mavis
Posted by Mavis at 7:24 AM No comments:

I spent a great day yesterday, officially National Quilting Day, with my satellite quilting group.  We meet usually monthly on a Saturday at the boardroom of Fort Rodd Hill Administration Office.  Fort Rodd Hill is part of Parks Canada and the home of Fisgard Lighthouse, the first lighthouse on Canada's west coast.    Here's some history of the Fisgard Lighthouse (courtesy of www.fisgardlighthouse.com)


Victoria, Vancouver Island, BC
Built November 16, 1860 Now Automated 48° 26' N 123° 27' W
- a National Historic Site - The first lighthouse on Canada's west coast is still in operation! There hasn't been a keeper here since the light was automated in 1929, but every year many thousands of visitors step inside a real l9th century light, and capture some of the feeling of ships wrecked and lives saved.
Built by the British in 1860, when Vancouver Island was not yet part of Canada, Fisgard's red brick house and white tower has stood faithfully at the entrance to Esquimalt harbour. Once a beacon for the British Royal Navy's Pacific Squadron, today Fisgard still marks home base for the Royal Canadian Navy.
Inside the building are two floors of exhibits, dealing with shipwrecks, storms, far- flung lights, and the everyday working equipment of the light keeper a century ago. Right next to the tower stirs on the second floor, a specially-made video evokes the loneliness and isolation that was the lot of the l9th century keeper.

This is the view from outside of the boardroom.  There is a picnic table on the grounds outside the boardroom as well and sometimes we will eat our lunch out there during the warmer spring/summer sewing days.  Pretty sweet eh??


Yesterday, this portrait was propped up and he seemed to be staring at me:

He 'sits' on our cutting table so once he was moved, no more eyeballs looking at me.   But we were all curious as to who he was.  My research, as noted above, answered that question.

And then I set to some serious sewing.  I have a niece getting married on April 28th and I've been working on her wedding quilt, "Midnight in Manhattan".    As of last night I managed to get all of the quilt blocks done.  Here's the finished block (they are all the same) and while I haven't measured them, I believe they are about 18" square. 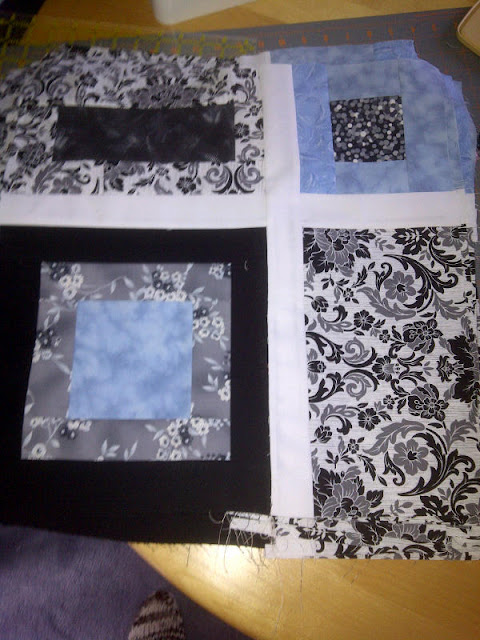 There are 25 blocks in total and they will be laid out 5 x 5.  The blocks are very big so this will fit a queen sized bed.  I am hoping to maybe get the blocks put together today/tonight but I have some bookkeeping goals to accomplish first.

While sewing, of course the girls were chatting up a storm as we usually do.  Topics always include vacation plans, retreat plans, UFOs, opinions on our projects of the day, and FOOD.  Since yesterday was St. Patrick's Day, a few of the girls were talking about the 'Corned Beef and Cabbage' dinners that are traditionally served on St. Patrick's Day.  That was all the encouragement I needed.

After the day was done, I made a b-line for the butcher shop and purchased my first ever Corned Beef.  Here's the recipe for those, who like me, have never had Corned Beef and Cabbage:

Boil the corned beef (drained of the brine) in a container of chicken broth.  Once it reaches a boil, simmer it for 2-3 hours.  Once it is cooked, remove the beef and add the following veggies to the broth:  Carrots, parsnips, potatoes and a whole cut-up cabbage.  Cook until the veggies are done.  Serve.  I understand that this is referred to as a 'boiled dinner' (according to the Betty Crocker cookbook apparently).  Go figure...I'm 50+ and that was my first boiled dinner of Corned Beef & Cabbage.  And it was amazing and will now be our traditional St. Patrick's Day Dinner.  Add some Guinness and you'll be speaking with a brogue in no time!

It was a full day of sewing and cooking and feasting (the eyes on the view mentioned above, the soul on the friendships in our group, and the belly on the boiled dinner).  It was truly a great day.  And how appropriate since it was indeed National Quilting Day.

Today, the leftover veggies and corned beef were turned into Bubble & Squeak (fry up the veggies and corned beef, serve a fried egg on top).  My DH, son and his friend were thrilled with dinner and breakfast.  That makes my heart glad.  There is something so satisfying about warming the bellies of our loved ones.

Email ThisBlogThis!Share to TwitterShare to FacebookShare to Pinterest
Labels: Midnight in Manhattan

Blogging Hiatus but I'm back...

Here's what I've been up to the last little while.  I guess I was just too busy sewing to actually blog about it.  Here are some photos:

I blogged here  about attending the Shattered Angles workshop with Susan Purney Mark a few weeks ago.  At that time I was struggling over fabric choices and a friend of mine suggested adding some orange to my blue to kick it up a notch.  I agreed that that would be really make the blocks pop. 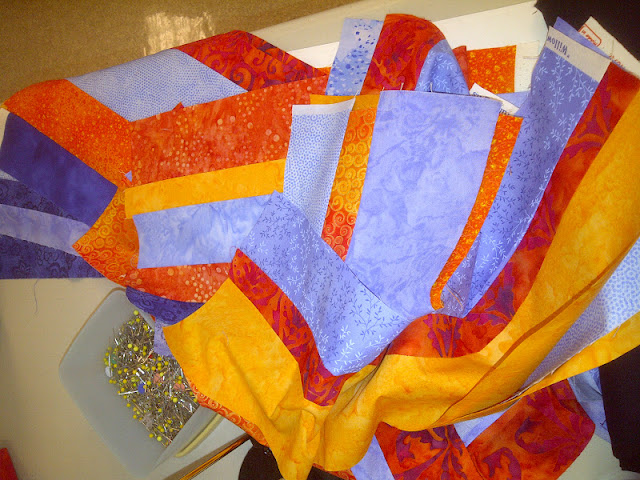 Oh yeah, that works!  Although I was falling asleep one night and had a short vision of the all-blue blocks so I may actually try that on a future quilt.  Does that ever happen to you?  If I've been going full-out on a quilting project or projects, when it comes time to quit for the day and as my head hits the pillow, I find that I get these pictures in my mind's eye of different quilt blocks, colours, ideas.  It's like my creativity is awakened by the activities of the day.  I wish I could capture those sudden bursts of creativity but I never seem to be able to remember them when I wake up. 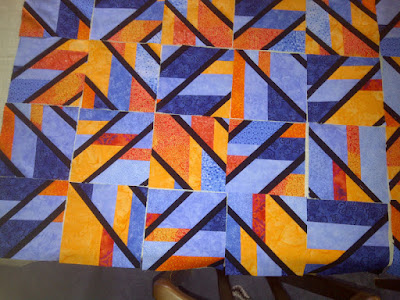 My friend Terry attended the class with me and she finished her blocks and created 2 baby quilts for our LOJ Quilters group.  Here are her 2 quilts: 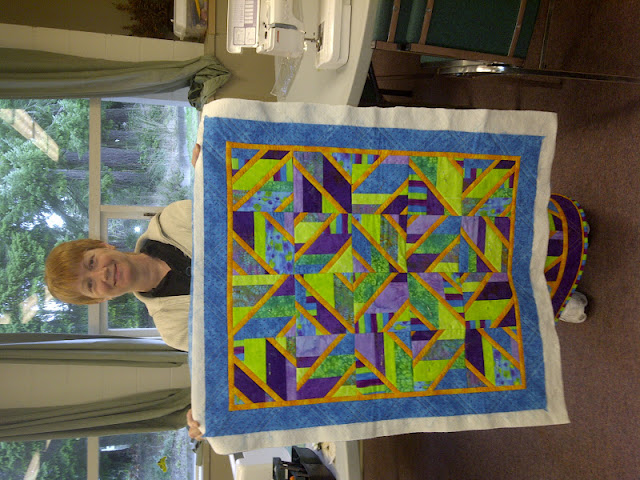 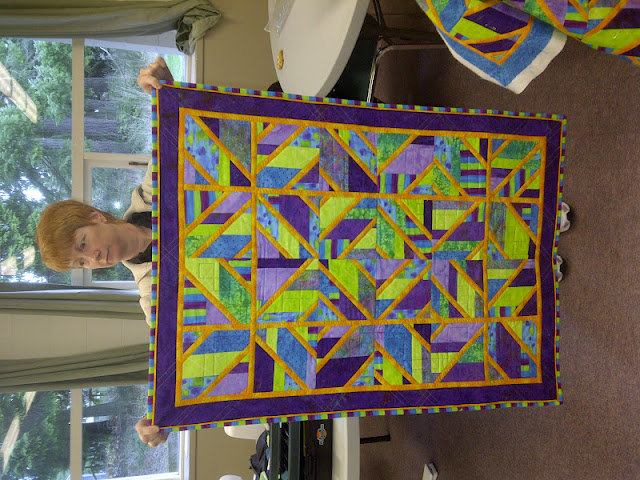 2 different border treatments and she added sashing between some of the blocks too.  Nice job!

And I finished the "Monkey in my house" quilt for my grand-nephew Quinn.  It started as the "jelly roll races 1800 quilt".  When I saw the jungle-like qualities of the background, I wanted to add the monkey.  It just seemed right.  I was very happy with the result and so was Quinn and his family.  It warms my heart and makes me smile. 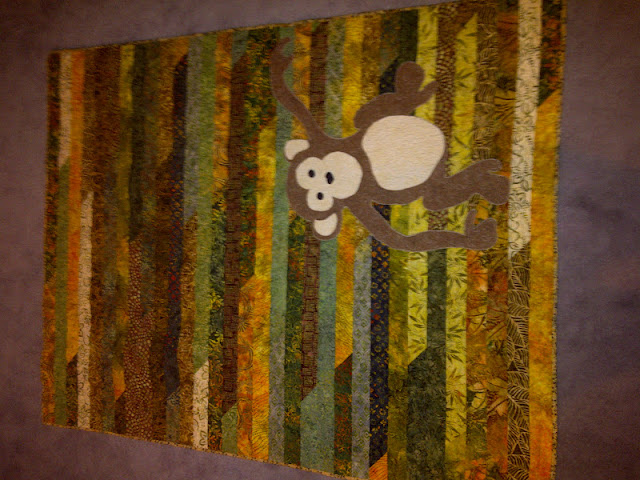 Here's a closeup of the monkey.  I used a fusible applique method for the monkey and outlined him (and his parts) with a satin stitch.  I then stippled inside the monkey to give him some texture.  I used a variegated thread . 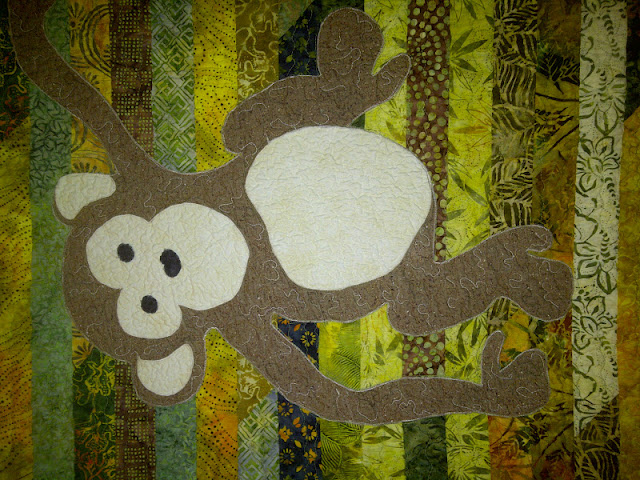 Next up is a wedding quilt I'm working on for my niece Anna.  I blogged here about the Manhattan Condo block that I bought at EQ Boutique and imported into my EQ7. So I started sewing the blocks together and I actually think I may stand a chance at finishing it in time for the wedding.  That would be amazing. 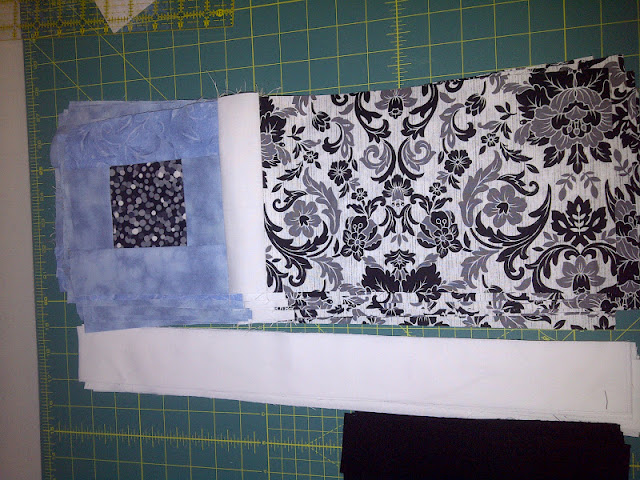 Here is the stack of pieces for the second (left) half of the blocks.  It will be a Queen sized quilt when it's done and the blocks are around 16". 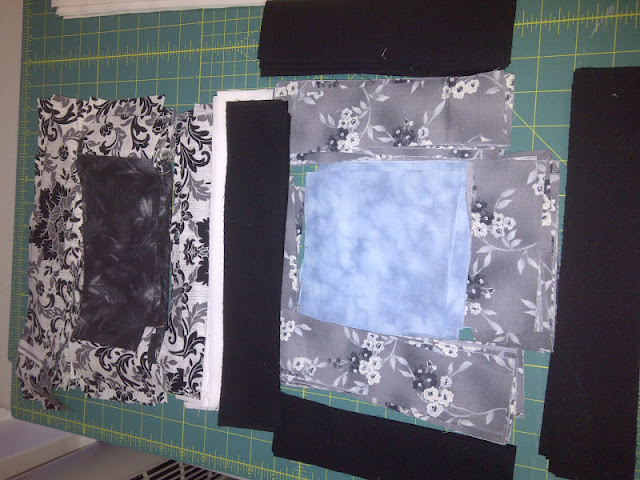 The blocks laid out ready to be constructed.  This quilt I'm naming "Midnight in Manhattan".  I hope they like it!  They chose both the pattern and the colourway. 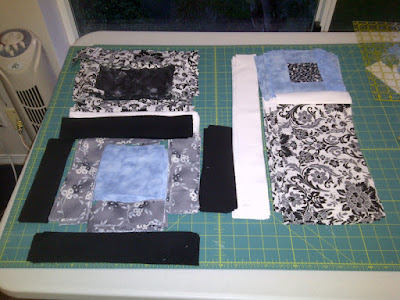 And last, but not least, another baby quilt finish.  This one is for our LOJ Quilting group at church.  We had a bunch of new quilters join us last month so it was a group project.  I took the blocks and sewed the quilt top and added the borders and quilted it.

It will be for a baby girl but I'm not yet sure which one or if she's even arrived yet.  Here is the quilt top finished but not quilted. 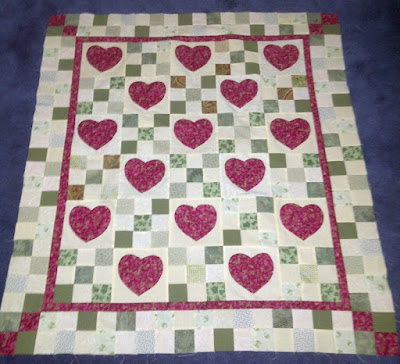 And here it is on my B-Line frame ready to quilt! Here it is fresh off the frame, all quilted and ready for binding. 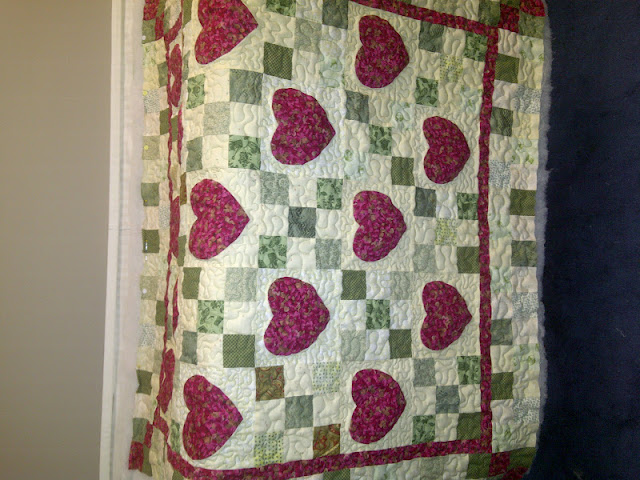 After I bound it I realized that I want to outline the hearts more.  I'll just do this on my domestic machine.  The stippling is smaller around the hearts and right now they really pop but I think it will even be better when I finish the outlines.
And tomorrow....I'm off to the sewing show.  http://creativestitchesshow.com/doc/Victoria_brochure.pdf
I am taking 2 long-arm courses plus a class on paper-pieced blocks using jelly rolls taught by Yvonne Menear.  That should be interesting and useful for that 2 1/2" scrap bin too!
If I come home with some completed blocks, I will try and post more pictures after tomorrow.
And yes, I do have a few projects on the go.  I'm totally guilty of starting at least 2 new projects without finishing off any UFOs.  I've got a goal of 12 UFOs to be completed for 2012 so I'm thinking I should really resist any new projects, but that wouldn't be any fun at all, would it!??
I'm thinking this will be the next UFO finish.  It is the one closest to being done so I should attack a project with the most immediate gratification. 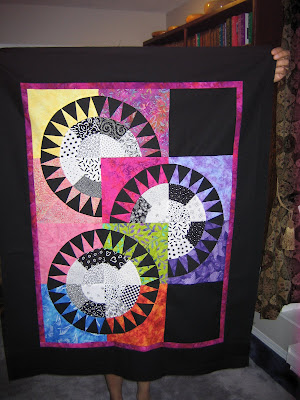 Until next time,
Mavis
Posted by Mavis at 8:54 PM 1 comment: