The adventures of Gertrude and Emily and the wrath off the angry bird lady..

Have you ever heard of such a title??
When my kids were little there was a series of irreverent kids books called Captain Underpants. I'm not kidding. Who would make that stuff up!!?? There was one title that particularly hit our collective family funny bone. Are you ready?  "Captain Underpants and the Wrath of the Wicked Wedgy Woman".  I'm not kidding.  Anyway I will explain this blog title later, but keep that in mind.
As previously posted, I'm finishing off a very old block of the month UFO called The Flower Garden Quilt from Newport Quilt Shoppe. The shop has been closed, according to my google search, and the pattern is discontinued but It's very eye catching indeed and I was drawn to it and bought a quilt kit years ago through a local quilt shop.
This quilt has been by far the most difficult piecing project I've ever done and I've thought a few times of either throwing in the towel, modifying it to simplify it by maybe paper piecing instead of templates. I've even though of appliqué, and I'm not a fan of appliqué. But I'm not a quitter either and I am actually quite a determined soul so it's not natural for me to let a pattern get the best of me.  So I persevered.  And I persevered some more.
Today was the day to tackle this block: 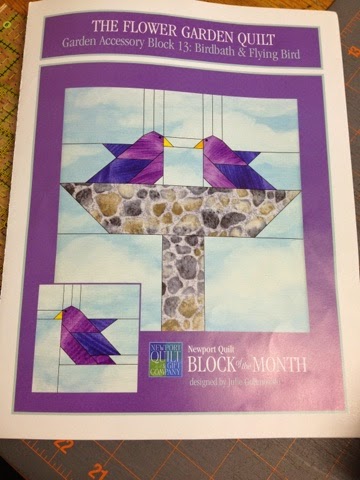 What I didn't realize, because I didn't read the fine print (duh!), was that there are two blocks in this pattern package. That would explain the bazillion template pieces for this one.  I decided to start with the biggest one, which is the two birds in the bird bath. Here are the two bird blocks under construction. 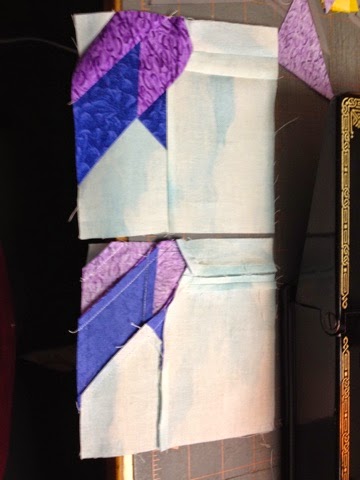 Not for the faint of heart. One shows the finished bird block. The other shows the back of it. You will notice the ever popular Y seam, only Barbie doll clothes size. How wonderful (not!).  Anyway, I conquered the beast. It's not perfect and I'm not totally thrilled with it but I figure I can quilt out the sins.  Here are the birdies which I have named Gertrude and Emily splashing in their bird bath. 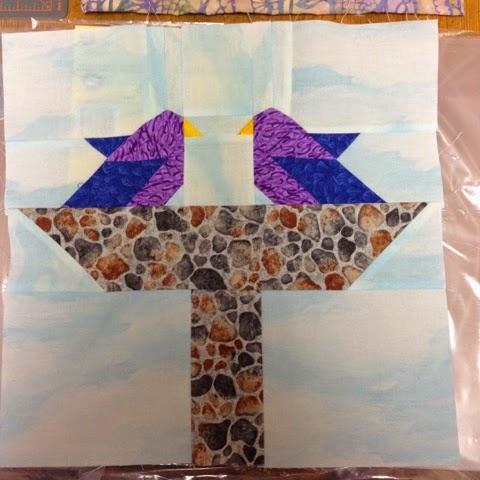 Next on to the second smaller block called the flying bird. 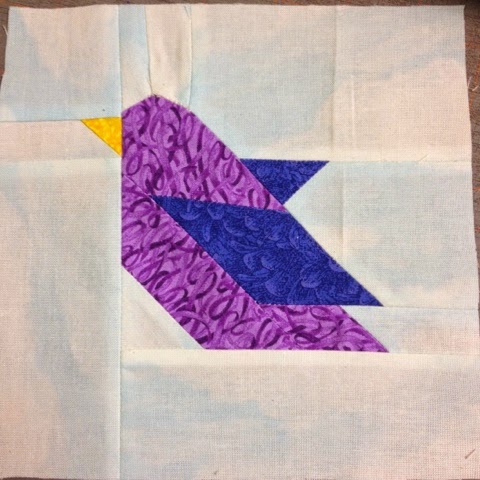 I didn't name this one.
At least they measured correctly (small mercies). Now the only thing remaining are the floral borders. 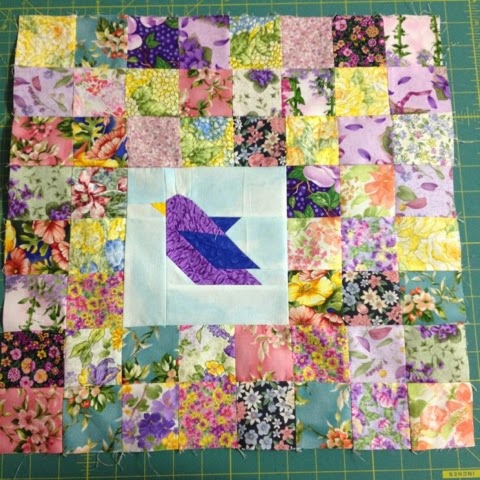 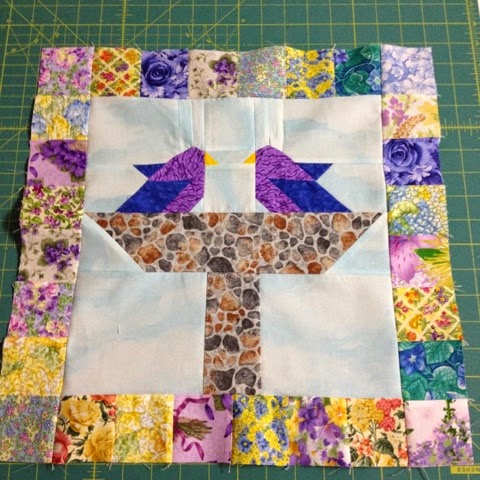 And now Gertrude and Emily are also wrapped in flowers. I'm glad they are happy little birds.
And now for the title explanation.  I was the angry bird lady today.  I was very aggravated putting together this block. I figure with that much emotion involved, I needed to name these darn birds. I immediately thought of the game Angry Birds, but they weren't the angry ones. I was. So there you have it :   Gertrude and Emily and the angry bird lady. That's me. But I'm angry no more, because my birdies are now drinking from their bird bath and the blocks for the quilt are coming together. I stood back after putting some on my design wall and I am very pleased. 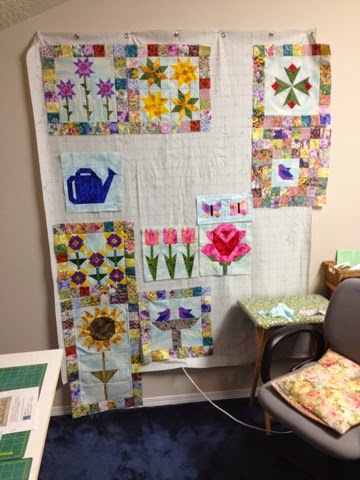 We're getting there. I have a few completed blocks still to frame. I have three blocks still to construct and frame and then it will be on to completion.   Has it all been worth it?  Absolutely yes!  All of the challenges we endure in our quilting projects make us grow our skills.  There is something very satisfying in crossing the finish line. It's even a sweeter victory when the journey has been a difficult one.  I am also recovering for surgery so I am building not only my skills, but my stamina and leg muscles.
We'll see if tomorrow's block(s) are easier. I expect they will be.
Until next time,
Mavis
Posted by Mavis at 6:39 PM No comments:

Back at the machine!!

I'm now over a month post-op and very happy to have been able to resume piecing at my sewing machine.
I feel like I've got quilter's ADD as I've got quite a few things started or underway or resumed.
Firstly, I'm finished piecing these totally scrappy log cabin blocks. I bought the nine patches in the middle at a guild sale probably for a buck. Then I saw an idea posted on a Facebook quilting page to wrap the, lovingly in log cabin logs.  I'm not sure what I will do with this quilt but it's been s fun and mindless piecing project using up my 1 1/2" strip scraps. 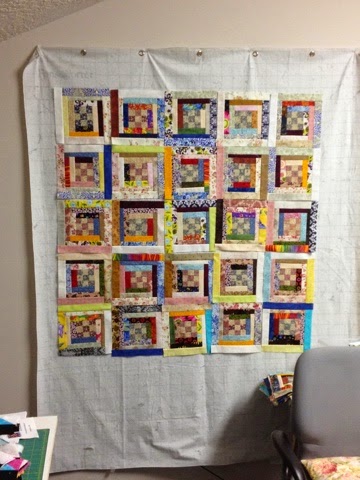 Secondly, I got the strips cut for my next quilt sample for my Amish block party original quilt design. 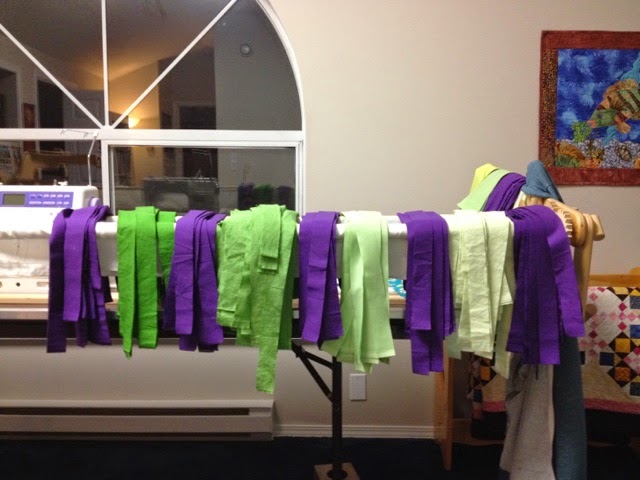 These are all laid out in order and will be stratas ready for subcut soon enough. More to follow on that project.
Then I was inspired to pull out this UFO called The Flower Garden quilt. I had 7 blocks left in this block of the month project from a few years ago.
Here are a couple of my finished blocks: 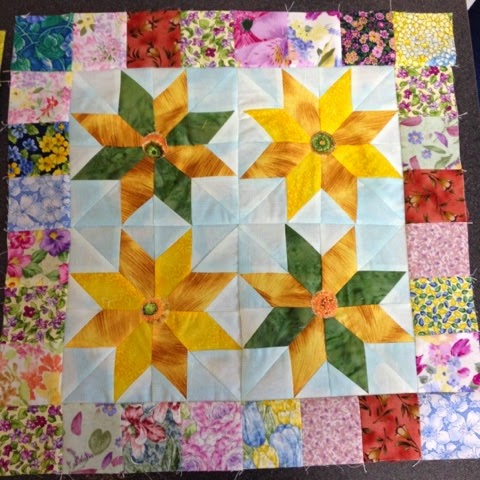 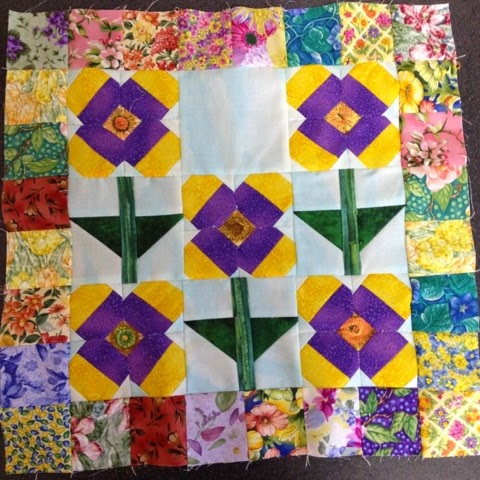 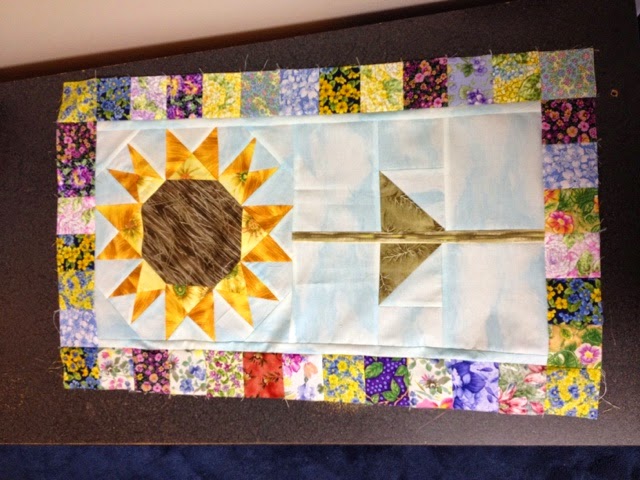 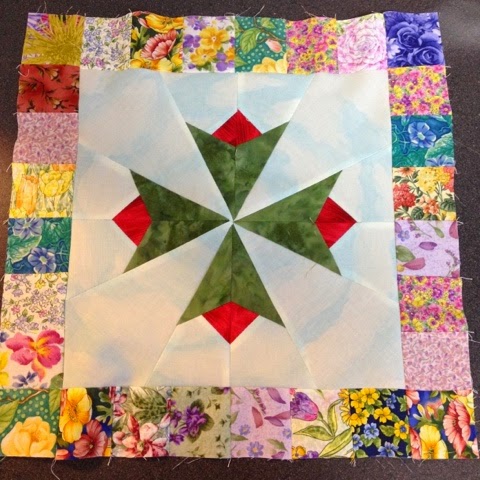 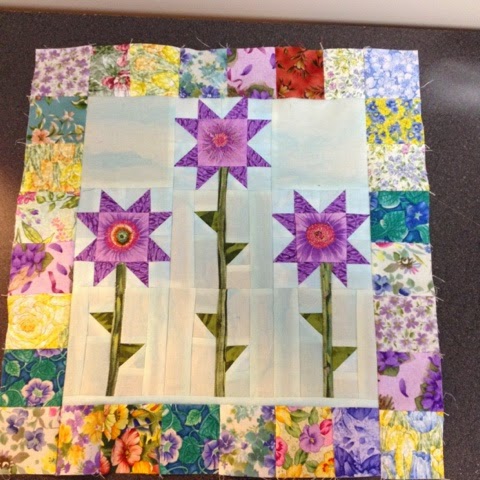 Template piecing is not my favourite technique and this quilt is full of them.  I'm nearing completion...finally!!  I've got 5 blocks left to go and they are complex!!  I decided to spend the evening creating all the templates, and then worked on cutting the fabric for each block. 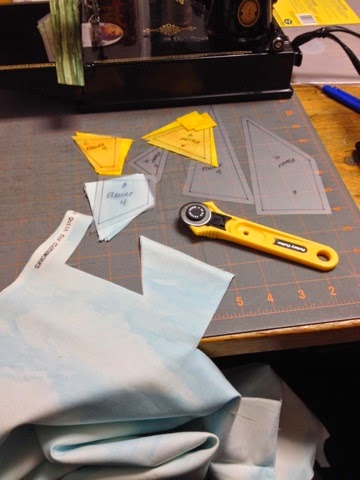 So, I got all the templates done, and two blocks cut out and ready to go.  The plan is to finish cutting the fabric for them in the next few days and then all the roadblocks to completion will be dealt with. It has taken all the determination I could muster to push this through to completion. The instructions haven't been great, and the construction has been very fiddly and some blocks were even short. Thankfully I had enough sky fabric to enlarge the blocks as necessary without affecting the design. Phew!
I'm sewing the floral 2 1/2 inch border squares together as leaders and enders in between the block components, thus maximizing efficiency and curbing thread wastage.
I would be thrilled to have this quilt top put together this week. Then, if it's not too big for my frame, I am feeling like I want to custom quilt it on my b-line quilt frame with my Janome 6500. Wish me luck!!  I'm still recovery from hip surgery and this goal may be too lofty but you can rest assured that there will be naps when needed and physio exercises in between sewing and ironing.
Until next time,
Mavis
Posted by Mavis at 10:19 PM 1 comment:

This is my first post for 2015 which, when I looked at my last posting date, kinda surprised me. But there is a good reason. My focus for the remainder of December and the beginning of January has been to manoeuvre around all the colds and sickness around me with the goal to staying healthy for hip surgery on January 19th. It felt like a touch down when the day finally arrived and it was my turn for a total hip replacement.  After sucking it up for two plus years of hip pain I am a new woman!! Or at least I will be soon enough.

I was home after about three days and now I'm on the slow road to recovery. I am easily bored so I knew that I would need a sanity project or three to keep my occupied during rest periods.

I got on the hexie bandwagon last year working on Grit's Le Passion Hexagon quilt.Grit's pattern can be found on her blog,  here.  It continues to amaze me just how generous some pattern designers are. I imagine that there are literally thousands of hours that Grit had put into designing and then creating her hexagon quilt. And she has shared this pattern free on her blog. Amazing!

Here is my humble beginning of Grit's quilt design: 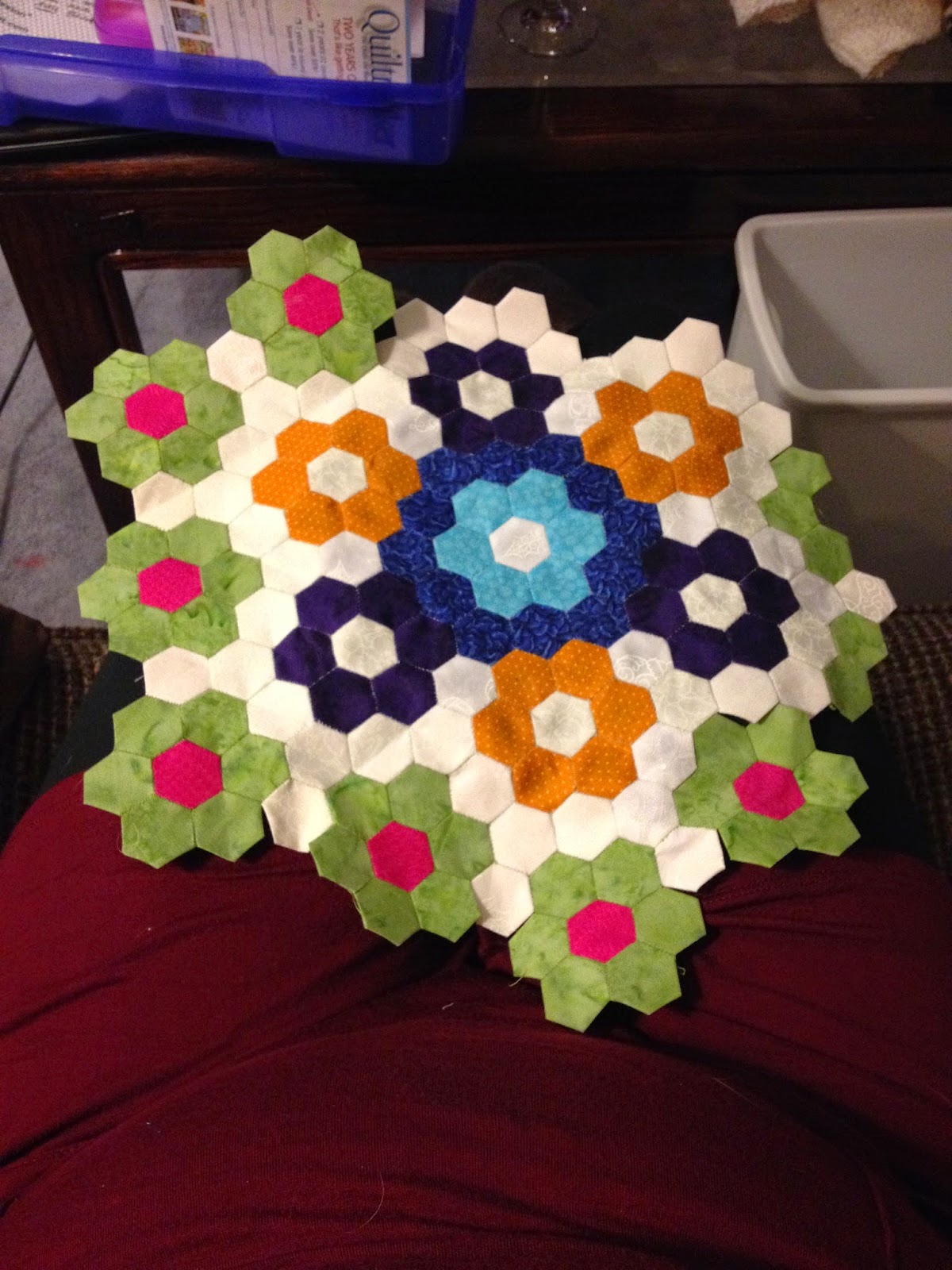 These little guys are addictive. I've chosen to go multi-coloured on my quilt reminiscent of Moroccan tile. I'm loving it so far.

Secondly, I'm working on hand quilting  a quilt I pieced in 2011 during the Super Bowl. It was a Super Bowl 12 hour mystery quilt and my friend Pam and I both got our tops completed. She machine quilted hers and I  decided to hand quilt mine.  Here it is 2015 and I'm still stitching away. This is a long term project with no deadline.

Here is the quilt top: 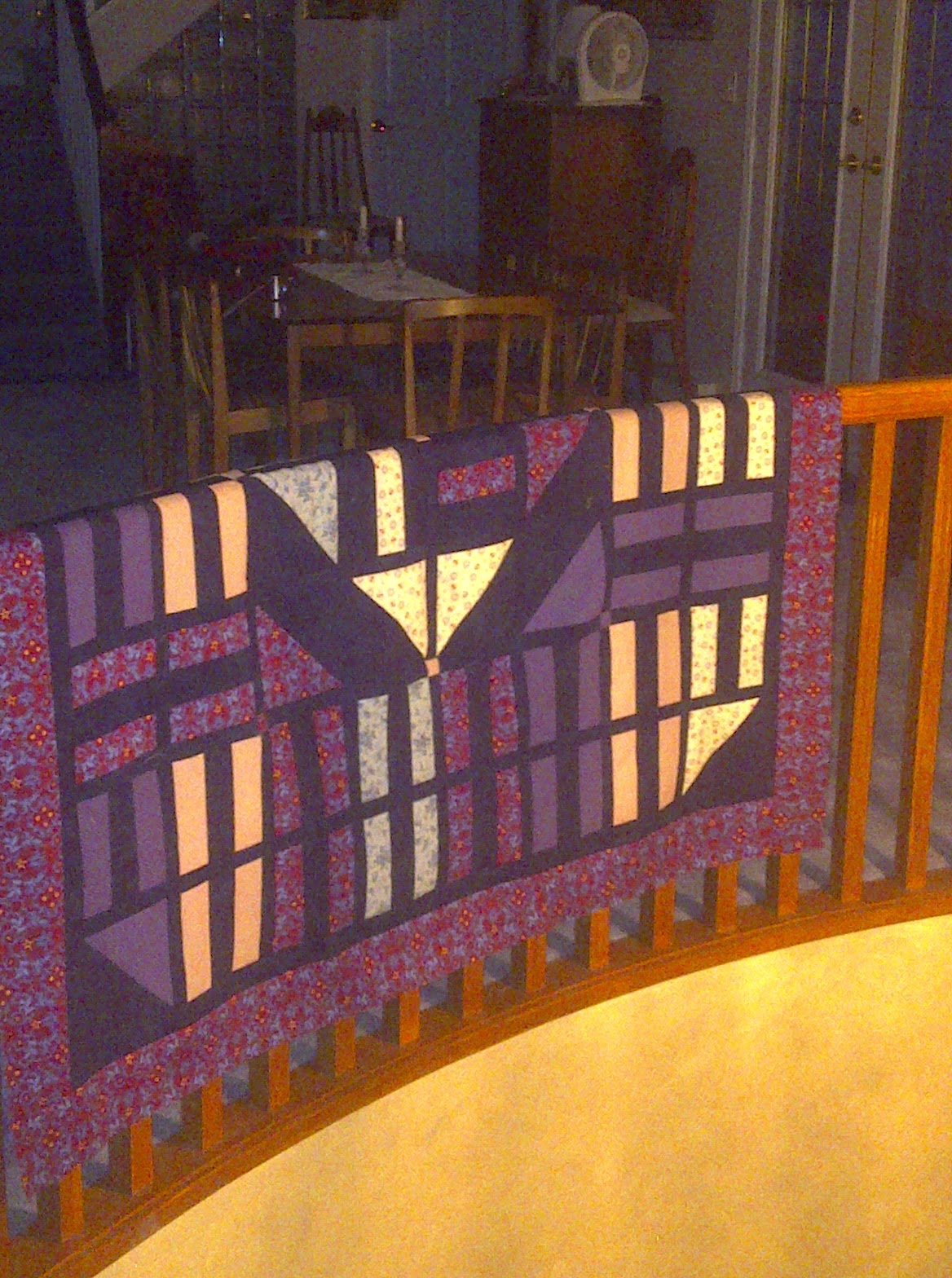 And here are some photos of the hand quilting underway: 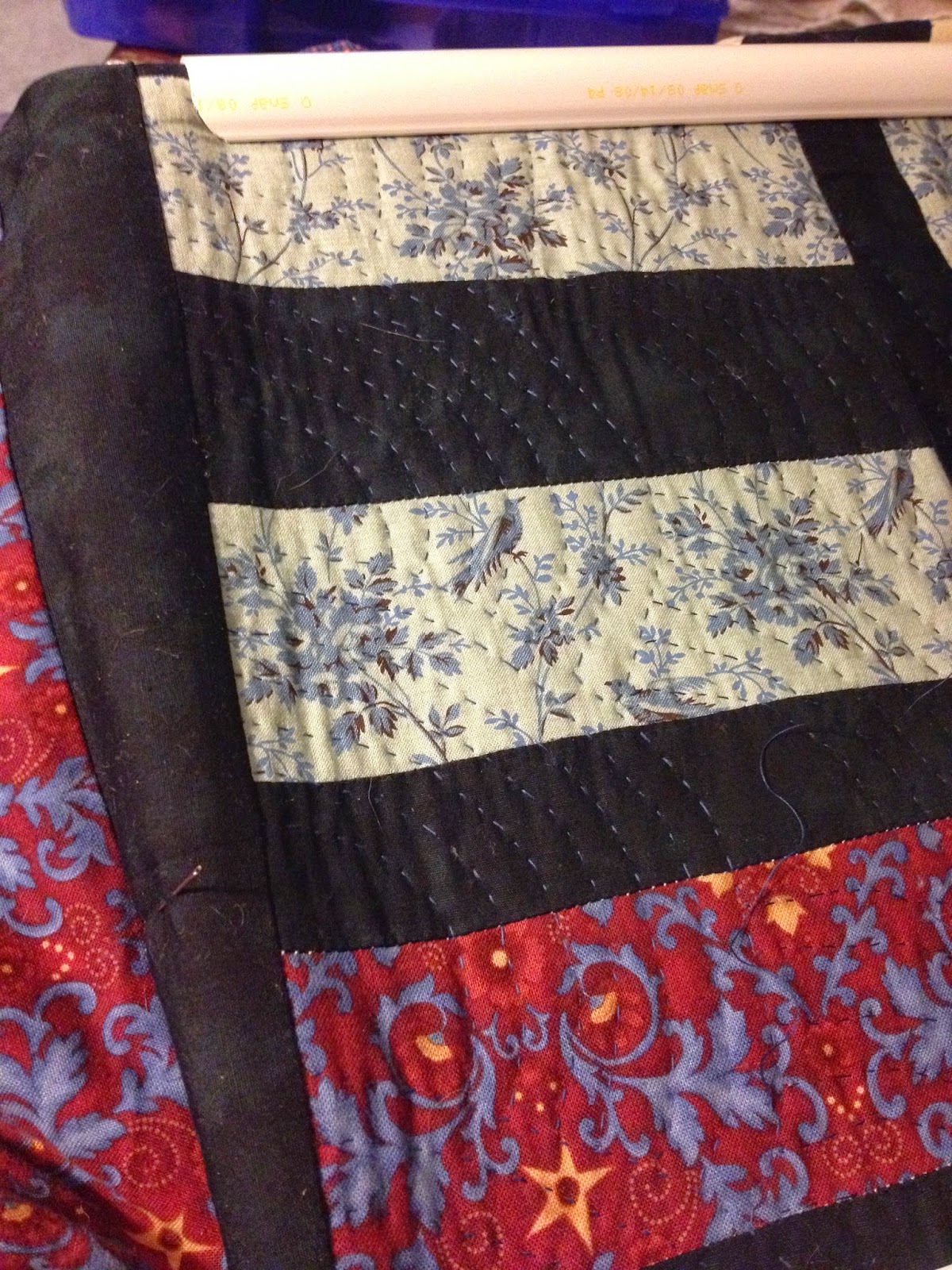 I'm doing freehand baptist fans.  No marking needed.  This was a technique that Bonnie Hunter of Quiltville shared and it appealed to me for this rather antique looking quilt.  I am starting with the inside edges of the quilt and proceeding around the outside.  I'm now on the second row working towards the centre.  According to Bonnie, this is a different way of approaching it, rather than quilting from the centre out. 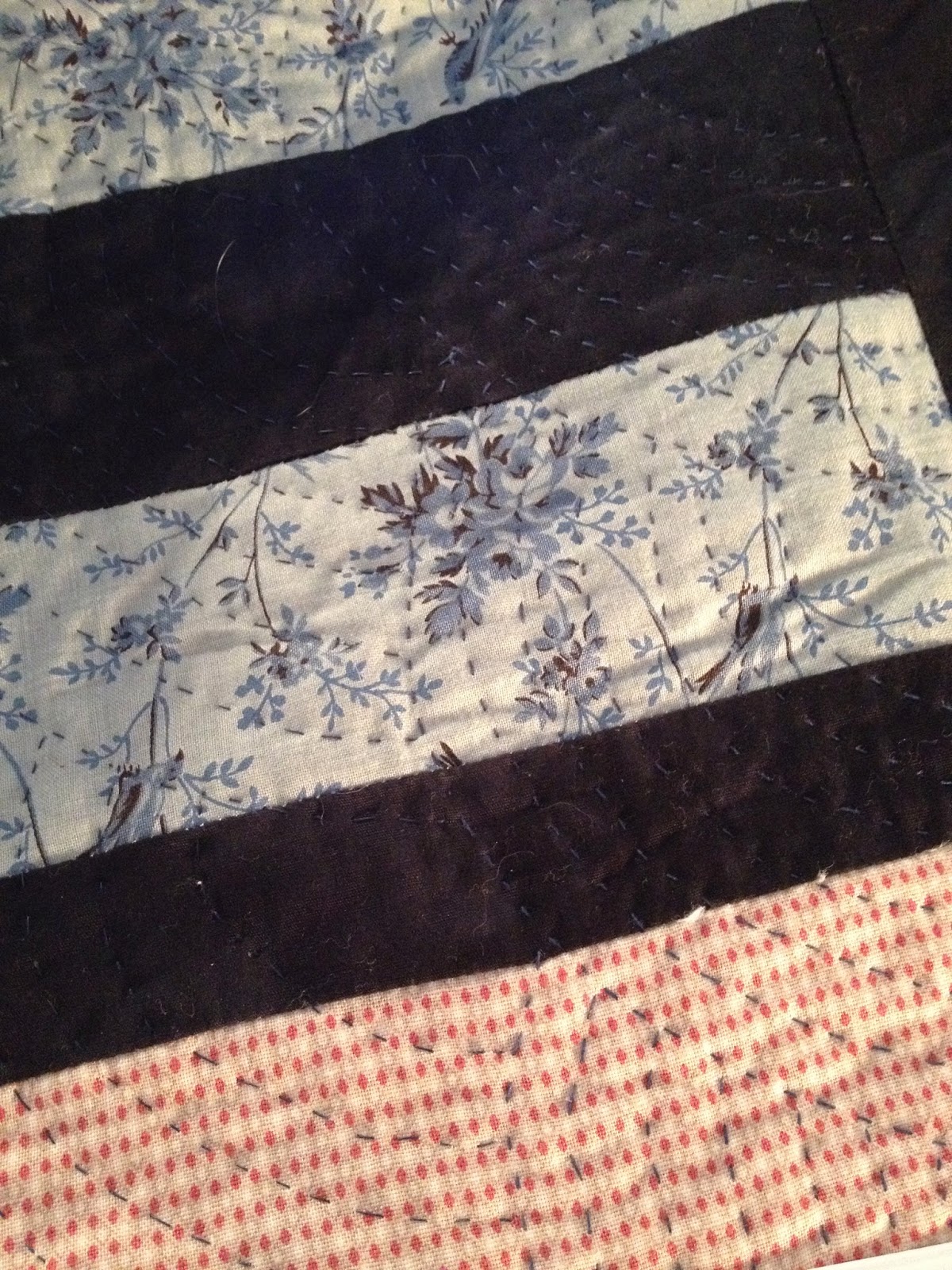 And here are my handy tools.  The pliers are a great addition for pulling those needles through the layers of the quilt. 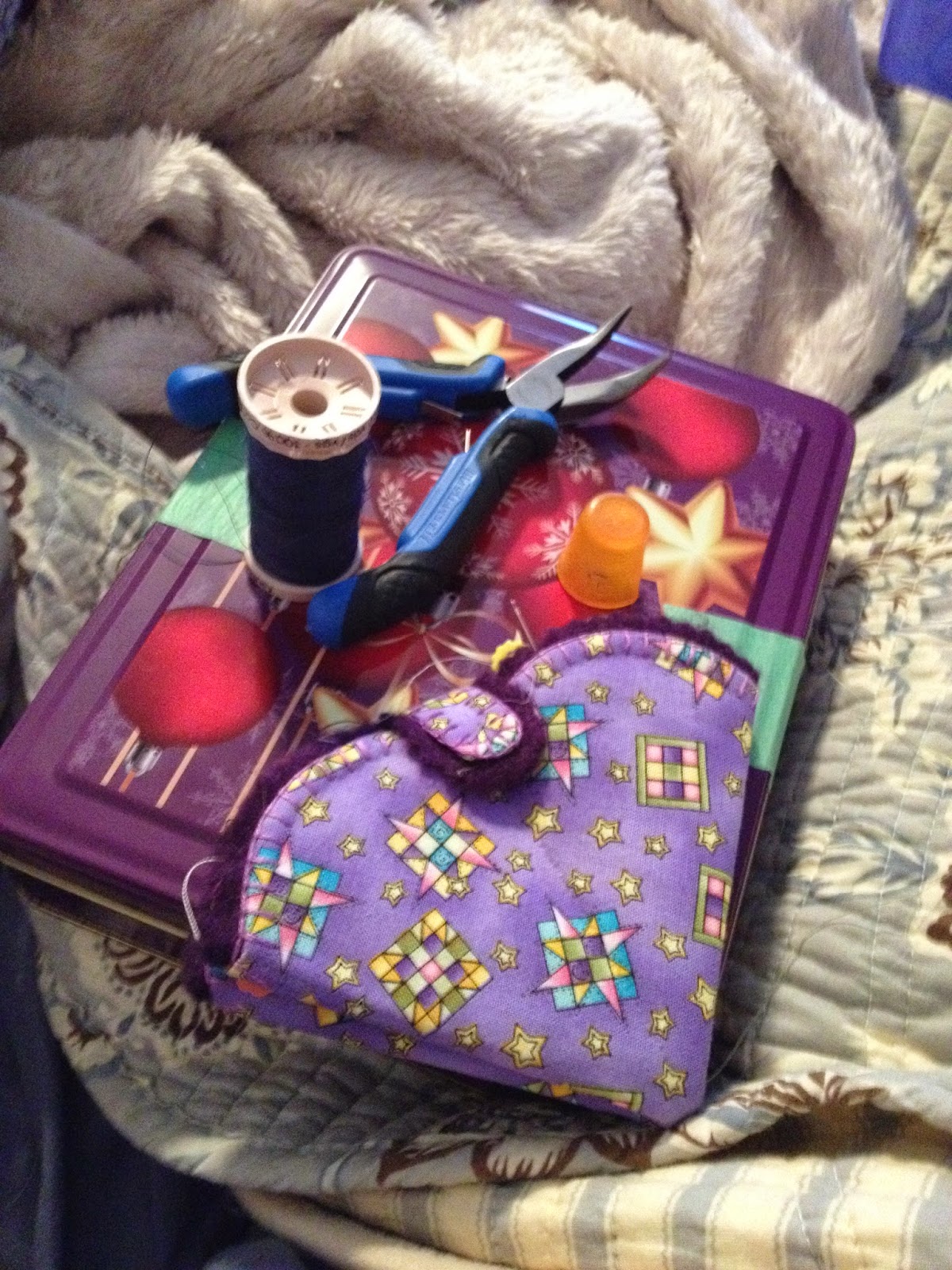 So, that's basically what's keeping me busy during recovery.  There will probably be more blog posts.  I'm also finalizing writing up a pattern that has been on the back burner for awhile.  It's for my Amish Block Party quilt: 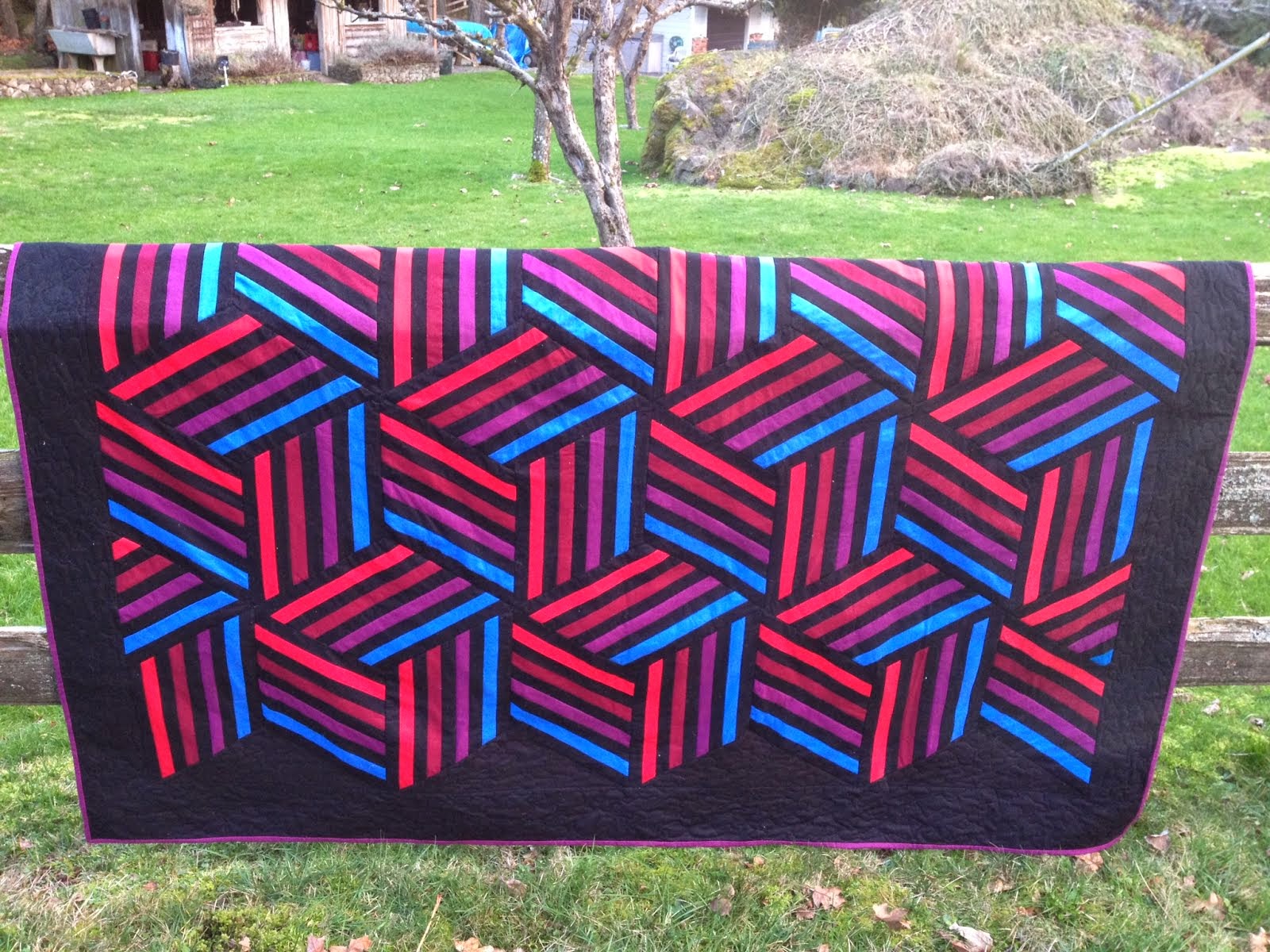 I'm going to start another one of these in a different colourway as a second sample soon.  Stay tuned!  I have a long way to go before I can sit at the sewing machine but I have enough to keep me busy for now anyway and inspiration to encourage my healing.

Mavis
Posted by Mavis at 9:41 PM No comments: